Unit 7: The Titanic
Past simple and past continuous

We have already heard the story of Eva Hart, a child travelling on Titanic with her family. In this session, we'll look at two more stories from survivors of the disaster: Karen Abelseth and Gus Cohen. You'll read a letter, listen to a dramatic story of escape, do some pronunciation practice, and take a quiz.

Karen Abelseth from Norway was 16 years old when she boarded Titanic. She was a third class passenger who was travelling to the USA to live with her sister in Los Angeles. This text is taken from a letter she wrote after the disaster. Read the text then do the activity below. You can also listen to a recording of the letter.

Read the text and try the activity 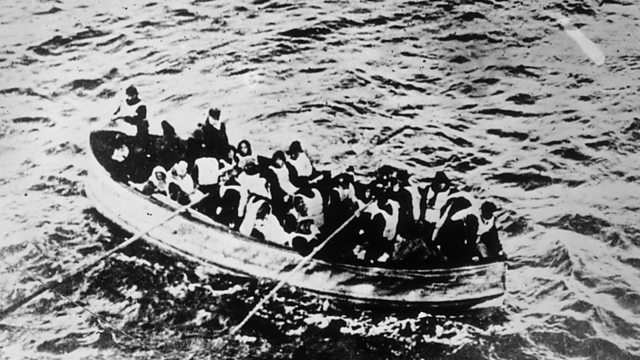 Oh, it has been a terrible time. The experience that I have had since I left you... If I had only known, I never would have travelled.

Sunday evening, we went to bed about ten. At 12 o'clock, they came down to wake us up. I didn't know what it meant when Adolf Humblen stood in front of my bed and said that I must hurry up because we hit an iceberg. I hardly managed to stand. Sigurd had to stand and hold me. Oh, Sigurd! He isn't here... He was so kind to me. I have almost cried to pieces... But it doesn't help at all.

When we came up the stairs and went over the railing, the ship was tilting heavily. After a while, people began entering the lifeboats. Olaus, Sigurd and Peter followed me up to the lifeboat. Just think how hard it was when I was to enter the lifeboat and they had to stay behind. I didn't want to enter but Sigurd said: "Just be strong. It will all end well." That was the last he said to me.

I was the last who went into that lifeboat and there was only one lifeboat left. If I had waited any longer, you would have never heard from me anymore. Then we were lowered. The others had to stay behind. I wished that I was there and that somebody else could be saved. Those were the worst hours I had ever experienced, and I hope I will never experience such a thing again. Imagine those cries! Those cries!

At 6 o'clock, we saw a ship far away. We came alongside at 7 o'clock.  They got blankets around us but it didn't matter, I thought, because I didn't see any of my company. After a while, we went through a corridor. There was Olaus! You can imagine there was joy, but Sigurd and Peter were not there... Many tears have fallen down on this paper.

Now you've read and listened to Karen's letter, use the information from her letter to match the sentence halves in the game.

Help
While Karen was waiting in the lifeboat,... Q29ycmVjdCAtIHdlbGwgZG9uZSE= U29ycnksIHRoYXQncyB3cm9uZy4gVGhlIGNvcnJlY3Qgc2VudGVuY2UgaXMgJ1doaWxlIEthcmVuIHdhcyB3YWl0aW5nIGluIHRoZSBsaWZlYm9hdCwgc2hlIGhlYXJkIG1hbnkgc2NyZWFtcy4n
a ...when the accident happened.
b ...when she entered a corridor on the rescue ship.
c ...Sigurd told her to be strong.
d ...Karen wished that somebody else could be saved.
e ...she heard many screams.
f ...the boat was tilting to one side.
Correct - well done!
Sorry, that's wrong. The correct sentence is 'While Karen was waiting in the lifeboat, she heard many screams.'

Help
Karen and her friends were sleeping... Q29ycmVjdCAtIHdlbGwgZG9uZSE= U29ycnksIHRoYXQncyB3cm9uZy4gVGhlIGNvcnJlY3Qgc2VudGVuY2UgaXMgJ0thcmVuIGFuZCBoZXIgZnJpZW5kcyB3ZXJlIHNsZWVwaW5nIHdoZW4gdGhlIGFjY2lkZW50IGhhcHBlbmVkLic=
a ...when the accident happened.
b ...when she entered a corridor on the rescue ship.
c ...Sigurd told her to be strong.
d ...Karen wished that somebody else could be saved.
e ...she heard many screams.
f ...the boat was tilting to one side.
Correct - well done!
Sorry, that's wrong. The correct sentence is 'Karen and her friends were sleeping when the accident happened.'

Great job! Next we'll hear the dramatic story of another survivor and focus on the pronunciation of past continuous forms.