Unit 22: Beyond the planets
Present and past passive

Have you ever read a science-fiction story about a future world? In this session you'll read about a project that uses science-fiction writing as a way to create hope for the future. You'll also be able to learn some interesting vocabulary about space exploration in News Report.

The night sky has fascinated humans for years. Maybe you've looked up and seen a comet - sometimes called a shooting star - yourself. But you probably didn't use a telescope like this one. Maybe you even saw it with the naked eye?

Listen to News Report to find out more about this story and learn some related vocabulary. Write down any new words as you listen and check them with the transcript and vocabulary list to boost your English! 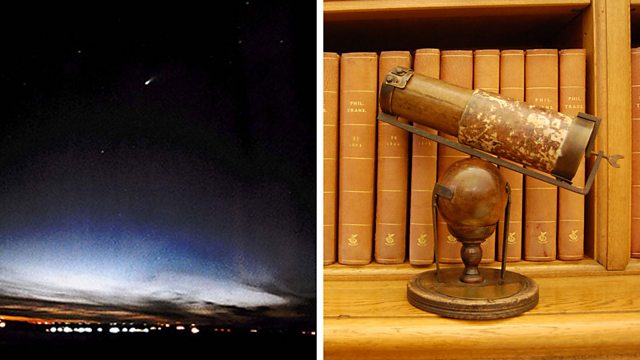 History was made in November 2014 when a probe was landed on a comet in deep space. The probe, called Philae, was launched 10 years earlier and travelled 6.5 billion kilometres to its rendezvous.

Although the landing didn't go entirely to plan, a huge amount of important data was sent back to Earth from the comet.

This data is studied by scientists to help us understand more about our own planet. Impacts from comets were very important to the evolution of the Earth and it is believed by some that they may have even brought water and life here.

It is thought that comets are made from material left over from when the outer planets in our solar system were formed. Another theory is that many may have come from outside our solar system.

These huge balls of frozen gasses, rock and dust with their distinctive 'tails' have fascinated humans ever since we started looking up into the night sky.

The most well-known is perhaps Halley's Comet. It can be seen with the naked eye and is visible from Earth every 75 to 76 years. It was first recorded in 240BC and since then its appearance has been described regularly throughout history.

In 1066 it was drawn as a fiery star in the Bayeux Tapestry. It was first photographed in 1910 and in that year it was so close that the Earth actually passed through its tail.

You can download News Report from our Unit 22 downloads page (size: 2.83MB).

a probe
a device which collects information

fascinated
been of great interest to

is visible
can be seen

And so we end our space exploration and adventure in science-fiction stories. We hope you enjoyed reading the article about a hopeful science-fiction future and listening to the amazing story of comets and space probes. Join us in the next session for the second episode of our new drama, Alice in Wonderland. You'll also have a chance to test your knowledge with our weekly quiz!