Unit 17: The Digital Revolution
'Used to' for past habits

We're off to Australia in this session! Read an article all about how mining has changed 'down under'. See how the past is compared to the present with used to. And Alice returns with a useful spelling tip.

Take a look at the truck in the picture below and think about these questions:

Read the text and complete the activity 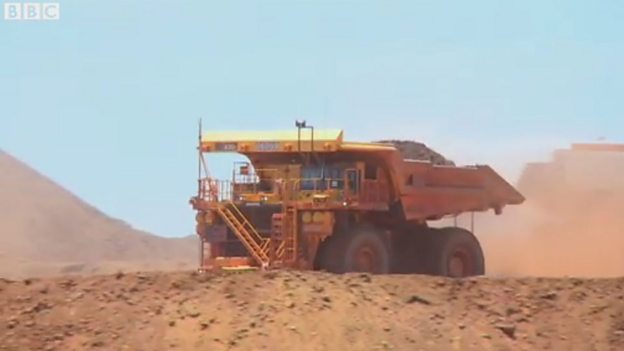 Image from an original BBC Click programme. Click is a BBC television programme covering news and recent developments in the world of consumer technology.

Here are the answers:

Now, read this article about Australia’s mining trucks and try the activity below.

Think of Australia and you probably think of modern cities like Sydney and Melbourne, sunny weather, and the beach!

But Australia is one of the world’s largest countries - and the world’s biggest island. It has a huge interior with thousands of miles of beautiful, uninhabited space.

This huge space is also part of a problem for Australia. These vast areas are full of rich pickings – mainly minerals and metals – but there are few people who want to go and get them.

Mining companies used to rely on a few brave and adventurous workers who would come and live a thousand kilometres from the nearest town. However, now the Four Hope Iron Ore Mine in North-western Australia (which actually is 1,000km from the nearest town!) uses giant robots to do the jobs that people don’t want to do.

Mine workers used to drill holes and operate machinery to crush rocks. They also used to drive the trucks and the trains that transported the iron ore to the coast. Now, automated machines do all the dirty and dangerous work.

The robot trucks are not only useful for the difficult jobs though. They are also very efficient. When the trucks had human drivers, they used to use a lot more fuel and chemicals to extract minerals. Miners also used to dig more holes but the automated trucks are much more precise.

The mining companies used to pay much more in energy bills – saving energy is very important when crushing rocks uses 5% of the world's energy! This extra efficiency means the companies can make millions of dollars in extra profit.

These machines do not mean there are no human mine workers. People still work in the mining industry, but they are doing different jobs.

Miners and engineers used to fly to the mines and work away from their families for weeks at a time but now they can work from home as remote operators. Employees at the mining companies used to be trained in manual labour but now they are trained in remote control and computer operation.

As well as remote operators, experts in mechatronics also work for the mining companies. Mechanics and maintenance staff also work at the mine to look after the equipment. However, there are only a few of them. There used to be hundreds of people working there.

Australia's robots, then, may provide an insight into life and work in the future. No matter where the work is, we can live anywhere - near the mines or on the coast - and let the machines do the heavy work.

This article is based on an original BBC News story.

What did you learn about the mechatronic trucks and how they have changed mining? Test yourself with this quiz.

Take a look at the beginning of the article

Help
There were a lot of people doing heavy work in Australia’s mines in the past, but now, robot trucks do most of it.
a True Q29ycmVjdCDigJMgdGhlcmUgdXNlZCB0byBiZSBhIGxvdCBvZiBtYW51YWwgbGFib3VyIGJ1dCBub3cgdGhlcmUgYXJlIG1vcmUgdHJ1Y2tzLgo=
b False V3JvbmcgYW5zd2VyIOKAkyB0aGlzIGlzIGFjdHVhbGx5IHRydWUuIFRoZXJlIHVzZWQgdG8gYmUgYSBsb3Qgb2YgcGVvcGxlIHdvcmtpbmcgaW4gdGhlIG1pbmVzIGluIHRoZSBwYXN0IGJ1dCBub3cgdGhlcmUgYXJlIG9ubHkgYSBmZXcu

Help
The old trucks used to use a lot more energy than the automated machines do.
a True Q29ycmVjdC4gVGhlIG5ldyBtYWNoaW5lcyBhcmUgbW9yZSBlZmZpY2llbnQsIG1lYW5pbmcgdGhleSB1c2UgbGVzcyBlbmVyZ3ku
b False SW5jb3JyZWN0LiBUaGUgb2xkIHRydWNrcyB1c2VkIHRvIHVzZSBhIGxvdCBvZiBmdWVsIGFuZCBjaGVtaWNhbHMgc28gdGhleSBhbHNvIHVzZWQgYSBsb3QgbW9yZSBlbmVyZ3ku

Look at the final three paragraphs of the article

Help
Hundreds of people still work at the mine today.
a True V3JvbmcgYW5zd2VyIOKAkyBvbmx5IGEgZmV3IHBlb3BsZSB3b3JrIGF0IHRoZSBtaW5lIG5vdy4=
b False UmlnaHQhIFRoZXJlIHVzZWQgdG8gYmUgaHVuZHJlZHMgb2Ygd29ya2VycyB0aGVyZSBidXQgbm93IHRoZXJlIGFyZSBvbmx5IGEgZmV3Lg==

Look for the word 'home' in the article

Help
Miners used to drive the trucks but now they can control them from home.
a True UmlnaHQgYW5zd2VyIOKAkyB3aXRoIHNwZWNpYWwgdHJhaW5pbmcsIHJlbW90ZSBvcGVyYXRvcnMgY2FuIGNvbnRyb2wgdGhlIHRydWNrcyBmcm9tIHRob3VzYW5kcyBvZiBraWxvbWV0cmVzIGF3YXku
b False VGhpcyBpcyBub3QgcmlnaHQuIFRvZGF5IHdpdGggc3BlY2lhbCB0cmFpbmluZywgcmVtb3RlIG9wZXJhdG9ycyBjYW4gY29udHJvbCB0aGUgdHJ1Y2tzIGZyb20gdGhvdXNhbmRzIG9mIGtpbG9tZXRyZXMgYXdheS4=

Look for the words 'manual labour' is mentioned in the article

Help
These days, training in manual labour is more important than training in computer operation.
a True VGhpcyBpcyBhY3R1YWxseSBmYWxzZS4gTWFudWFsIGxhYm91ciB1c2VkIHRvIGJlIGltcG9ydGFudCBidXQgbm93IGl0IGlzIG5vdC4=
b False Q29ycmVjdCDigJMgd2VsbCBkb25lISBDb21wdXRlciBvcGVyYXRpb24gaXMgbW9yZSBpbXBvcnRhbnQgdGhlc2UgZGF5cy4=

Feedback Summary
Excellent! Great job! Bad luck! You scored: x / y
1
There were a lot of people doing heavy work in Australia’s mines in the past, but now, robot trucks do most of it.
Incorrect
2
The old trucks used to use a lot more energy than the automated machines do.
Incorrect
3
Hundreds of people still work at the mine today.
Incorrect
4
Miners used to drive the trucks but now they can control them from home.
Incorrect
5
These days, training in manual labour is more important than training in computer operation.
Incorrect
6
Mechatronic trucks are expensive and this means that mining companies used to make more money.
Incorrect

So far in Unit 17, you've seen a debate about change, studied the grammar of used to, and seen used to in an article. In the next activity, we'll join Alice again - not for an argument this time! She's here to remind you of an important spelling tip.