Come on in and take a look at the BBC's newest building - and the home of BBC Learning English. Along the way you'll learn about comparatives and superlatives, so you can talk about the biggest and best things in your life.

The places we see, live and work in every day are always changing. Sometimes, as they get older, it's hard to keep them clean and in working order. They need to be redeveloped with better, newer and more advanced facilities. In this session, you will learn about the BBC’s New Broadcasting House, which opened in 2013 after a ten-year redevelopment project. You will also learn about some of the famous names and events connected with Broadcasting House and take a quiz to test your knowledge.

First, let's take a look inside the building. After you've watched the video, there's a reading activity. Then there are some questions to test you understood the text.

Watch the video, read the text and complete the activity 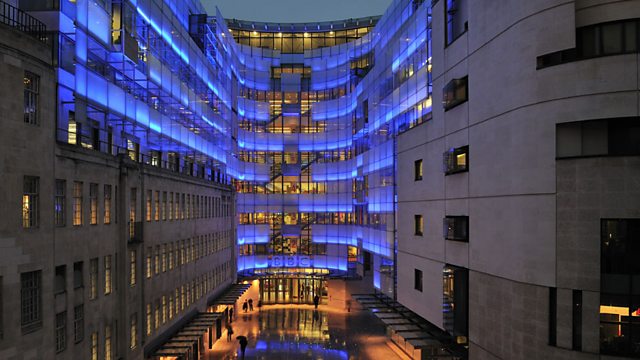 Welcome to New Broadcasting House, home to the BBC - and BBC Learning English, of course!

For the first time in the BBC's history, it has brought together its News, Radio, Television and Online services into one central London headquarters. It now provides the most advanced digital broadcast and production centre in the world and a better working environment for its staff.

This is now the BBC's largest creative hub in the UK. More live programmes are broadcast from here than from any other BBC site, serving a worldwide audience of more than 150 million every week.

The redevelopment of Broadcasting House in the centre of London is the largest capital project ever undertaken by the BBC. It took a decade to complete and involved the BBC's biggest relocation of staff in its 90 year history.

New Broadcasting House is a 12-storey extension that's connected to the original smaller home of the BBC, simply called Broadcasting House, which was built in 1932. The new building is home to the largest live newsroom in Europe. There are many TV and radio studios using some of the latest technology.

With thousands of people now working here, it's busier than ever but there are plenty of places to meet and talk to colleagues. And it's a more accessible building for the public too - they can come inside, take a tour and get a look at what goes on behind the scenes in this iconic building.

Now you've learnt something about Broadcasting House, let's see what you remember. Read the sentences below and decide if they are true or false. You can watch the video and read the text again if you need to - and don't forget to use the hints as well!

Help
New Broadcasting House is home to all of the BBC's radio, television and digital services.
a True Q29ycmVjdA==
b False VGhpcyBpcyB0cnVlIC0gTmV3IGJyb2FkY2FzdGluZyBIb3VzZSBvZmZlcnMgb25lIGNlbnRyYWwgbG9jYXRpb24gZm9yIGFsbCBmb3JtcyBvZiB0aGUgQkJDJ3Mgb3V0cHV0Lg==

Help
It offers the most advanced broadcasting and production facilities in the world.
a True Q29ycmVjdA==
b False VGhpcyBpcyB0cnVlIC0gdGhlIGJ1aWxkaW5nIHVzZXMgdGhlIG1vc3QgcmVjZW50IGFuZCBhZHZhbmNlZCB0ZWNobm9sb2d5IGZvciBpdHMgcHJvZHVjdGlvbnMu

Help
It is the BBC's largest centre and serves a UK audience of more than 150 million every week.
a True UmVhZCB0aGUgdGV4dCBjYXJlZnVsbHkhIE5ldyBCcm9hZGNhc3RpbmcgSG91c2Ugc2VydmVzIGFuIElOVEVSTkFUSU9OQUwgYXVkaWVuY2Ugb2YgbW9yZSB0aGFuIDE1MCBtaWxsaW9uLiBUaGUgcG9wdWxhdGlvbiBvZiB0aGUgVUsgaXMgb25seSA2NCBtaWxsaW9uIQ==
b False Q29ycmVjdA==

Help
The original Broadcasting House was built more than 100 years ago.
a True V3JvbmcuIFRoZSBvcmlnaW5hbCBidWlsZGluZyBvcGVuZWQgaW4gMTkzMiAtIHRoYXQgd2FzIDgyIHllYXJzIGFnby4=
b False Q29ycmVjdA==

Help
The new building is very busy but there is plenty of space for work colleagues to use.
a True Q29ycmVjdA==
b False Q2hlY2sgdGhlIHRleHQgYWdhaW4uIFRob3VzYW5kcyBvZiBwZW9wbGUgd29yayBoZXJlIG5vdyBidXQgdGhlcmUgaXMgcGxlbnR5IG9mIHNwYWNlIGZvciB0aGVtIHRvIHdvcmsgYW5kIGhhdmUgbWVldGluZ3Mu

Help
New Broadcasting House is not open to members of the public.
a True VGhpcyBpcyBmYWxzZS4gVGhlIGJ1aWxkaW5nIGlzIGFjdHVhbGx5IG9wZW4gZm9yIHRvdXJzIGFuZCB2aXNpdHMgZnJvbSB0aGUgcHVibGljLiBDb21lIGFuZCBzZWUgaXQgaWYgeW91IHZpc2l0IExvbmRvbiBpbiB0aGUgZnV0dXJlIQ==
b False Q29ycmVjdA==
Congratulations you completed the Quiz
Excellent! Great job! Bad luck! You scored:
x / y

How did you get on? Are you getting to know our home? In the next activity we will test what you know about the BBC and introduce you to some comparatives and superlatives - see if you can spot them.