The Future: present continuous, be going to, will

Christina in Austria says: would you be able to explain the difference between "will" and "going to" when talking about the future please? I've heard a few explanations in the past but I'm still unsure about what to use a lot of the time. 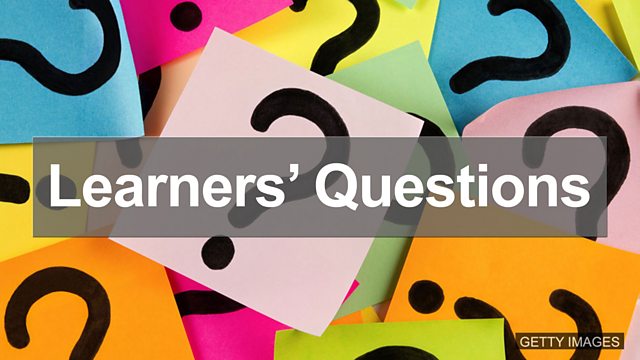 Dan
Hi guys! Dan for BBC Learning English here with this week's Learner Question. Find out what it is after this.

This week's learner question comes from Christina from Austria, who asks: Would you be able to explain the difference between "will" and "going to" when talking about the future, please?

Of course, Christina, it’s quite a common question. I hope this answer helps.

So, there’s a difference between future predictions and future plans and we’re only going to be looking at future plans for the moment. Please remember that these rules are a rough guide and sometimes native speakers bend or even break them – so be careful.

So, a man goes to the airport. He’s carrying a suitcase. In the suitcase is a passport, some clothes, some sunglasses and a ticket. He’s goes up to the check-in desk and he says to the lady there, “I’m flying to Spain later today.” Notice this is the present continuous. That’s for a future arrangement. It’s called an arrangement because it’s like a plan, but he has the ticket, and the ticket is evidence of the plan. This means that if the man were to disappear, the airline would still expect him to arrive for the flight. That’s what the evidence means.

However, the lady behind the check-in desk says “Sorry. No, that flight’s been cancelled. But you can fly to Australia or to Russia.” Well, this is a big decision, so the man goes to the cafe to think about it. When he comes back he says, “Ok, I’m going to fly to Australia.” That’s be going to for a future plan. He’s had time to think about it in the cafe before speaking, but he doesn’t have a ticket so it’s not an arrangement.

But the lady behind the check-in desk says “Sorry! You took too long in the cafe. That flight has gone. But you can still fly to Russia.” So, the man says, “Ok. I will fly to Russia.” That’s will for a future based on a decision made at the moment of speaking.” He makes the decision at that time. No plan existed before that.

Did you get it? That’s present continuous for a future arrangement. It’s be going to for a future plan and it’s will for an instant decision made at that moment.

I hope that answers your question Christina. Thank you very much for writing to us. If anybody else out there has a question for Learners’ Questions, you can email us on: learning.english@bbc.co.uk. Please remember to put Learners’ Questions in the subject box and your name and the country that you’re writing from. Unfortunately, we get so many emails that can’t every question, guys, but we do read every single one. And for more information, go to our website, bbclearningenglish.com. That’s it for this week’s Learners’ Questions. I’ll see you next time. Bye!

Present Continuous
The present continuous is made using be + (verb)ING. It is used to talk about arrangements in the future. An arrangement is a plan - something decided before the time of speaking - plus some kind of evidence of the plan. E.g. an aeroplane ticket, a hotel booking, a restaurant reservation, a phone call to a friend. The easy way to remember is to ask this question: If I disappear right now, would anyone expect me to be at this thing? If the answer is yes, it's an arrangement!
I'm flying to Spain in three hours!
He's playing tennis with his brother tomorrow.

Be going to
Be going to is followed by a bare infinitive verb. Be going to is used to talk about future plans. These are events which have been decided about before the moment of speaking, but they are not arrangements because nothing has been set or booked.
I've decided that I'm going to fly to Italy.
I'm really tired. I'm going to stay in tonight.

Will
Will is a modal verb and is followed by the bare infinitive. Will is used to when we make decisions about future actions at the moment of speaking. When you go into a cafe without knowing what you want to eat is a good example. When asked, you make a quick choice!
Ok! I'll fly to Russia.
I'll have a hamburger.

This is the present continuous! Is this an arrangement?

Help
I've just called the restaurant and made a reservation. We're having dinner at 8pm.
a correct WWVzLiBUaGlzIHNlbnRlbmNlIGlzIGNvcnJlY3Qu
b incorrect U29ycnkuIFRoaXMgaXMgYW4gYXJyYW5nZW1lbnQuIFRoZSBkaW5uZXIgaGFzIGJlZW4gYm9va2VkLg==

Do people usually go on holiday without thinking about it beforehand? Is it a common immediate decision?

Help
I will go on holiday tomorrow.
a correct U29ycnkuIEl0IGlzIHVubGlrZWx5IHRoYXQgYSBwZXJzb24gd291bGQgc3VkZGVubHkgZGVjaWRlIHRvIGdvIG9uIGhvbGlkYXkgd2l0aG91dCB0aGlua2luZyBhYm91dCBpdCBmaXJzdC4gVGhpcyBpcyBtb3JlIG9mIGEgcGxhbiB0eXBlIGV2ZW50Lg==
b incorrect TmljZSEgSXQgaXMgdW5saWtlbHkgdGhhdCBhIHBlcnNvbiB3b3VsZCBzdWRkZW5seSBkZWNpZGUgdG8gZ28gb24gaG9saWRheSB3aXRob3V0IHRoaW5raW5nIGFib3V0IGl0IGZpcnN0LiBUaGlzIGlzIG1vcmUgb2YgYSBwbGFuIHR5cGUgZXZlbnQu

What type of verb follows be going to?

Is this a plan or an arrangement?

Well, that's it for this unit! Join us again in Unit 18 for more Exam Skills, News Review, Pronunciation in the News, The Teachers' Room and Learners' Questions!