Have you got a minute to spare? Phil explains 3 ways to pronounce '-ed' in this English In A Minute.

Have you ever wanted to know different ways to say 'ed'? Find out with Phil in this English In A Minute. 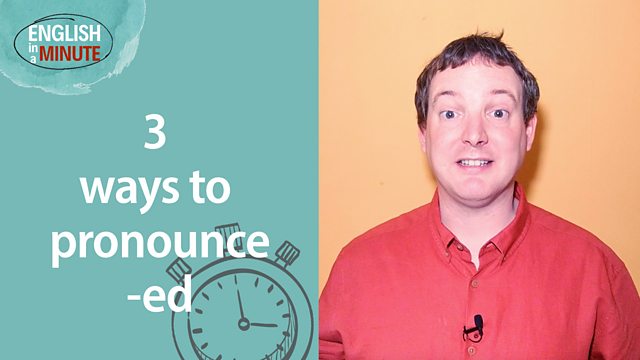 Did you know these two letters can be pronounced in three different ways?

First, feel your neck. If a sound makes it vibrate like /d/, then it's voiced. If it doesn't like /t/, then it isn't.

Where 'ed' comes after a vowel or a voiced consonant then pronounce it as /d/ - which is a voiced sound.

If you have 'ed' after an unvoiced sound then it sounds like /t/.

So if 'ed' comes after a voiced sound, then it's voiced.

'ed' is pronounced /d/ when it comes after a voiced sound.

You can see if a sound is voiced by holding your throat and feeling for vibrations. For example, the letter 'v'.

'ed' is pronounced /t/ when it comes after a unvoiced sound.

You can see if a sound is unvoiced by holding your throat and feeling that there are no vibrations. For example, the letter 'k'.

'ed' is pronounced /id/ when it comes after the letters 'd' or 't' and makes a two syllable word.

Help
How would you pronounce 'ed' in this word: 'paved'?
a /t/ U29ycnkuIFRoYXQncyBub3QgY29ycmVjdCEg
b /id/ U29ycnkgLSB0aGF0J3Mgbm90IHJpZ2h0IQ==
c /d/ V2VsbCBkb25lIC0gdGhhdCdzIGNvcnJlY3Qh