Have you ever wondered when you use adjectives without nouns? Watch Tom explain in this English In A Minute.

Let Tom teach you how to use adjectives without nouns in this English In A Minute. 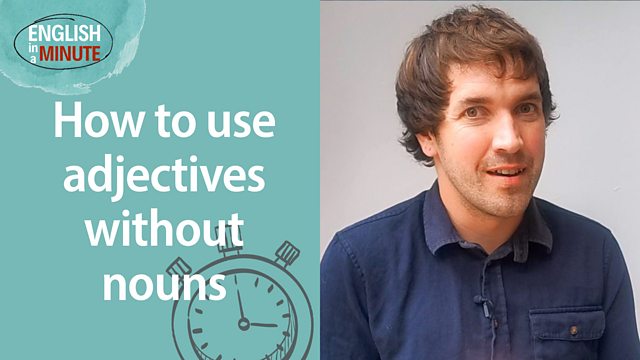 People is a noun.

Rich people have a lot of money.

Rich people are a group.

To describe a group of people with a shared quality, we can use an adjective without using a noun.

We just add the.

Then, we can delete the noun.

The rich have a lot of money.

Now, we have a plural expression.

We can say that poor people are the opposite of rich people.

Or:
The poor have less than the rich.

This is a simple direct expression and it sounds very natural.

We can delete people [and] add the:

The British drink a lot of tea.

Normally, we use adjectives to describe a noun.

In these sentences, unemployed and young are adjectives.

Unemployed people and young people are a group. If you want to describe a group of people with a shared quality, we can use an adjective without using a noun. We need to add the in front of the adjective. Then you have a plural expression, for example: The young.

Which word(s) do we use to complete this sentence?

What word goes before the adjective?

Help
What word do we normally add in front of the adjective to remove noun?
a if U29ycnkuIFRoYXQncyBub3QgY29ycmVjdCE=
b when U29ycnkgLSB0aGF0J3Mgbm90IHJpZ2h0IQ==
c the V2VsbCBkb25lIC0gdGhhdCdzIGNvcnJlY3Qh

Which sentence is written correctly?