Donald Trump's wife, Melania, has been accused of copying Michelle Obama.  Find out more with Rob and Sian as they look at how the world's media is reacting and the words you need to talk about the story.

Are these two speeches similar?

Donald Trump's wife, Melania, has given a speech supporting her husband. However, she has been accused of copying parts of Michelle Obama's speech eight years ago. Listen to see if you think these speeches are similar and to learn useful phrases for talking about this story.

Which of these expressions do we NOT use to describe two people who look very similar? 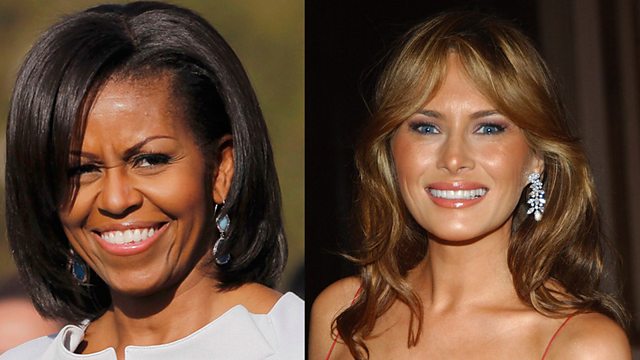 There's been a chaotic opening to the Republican National Convention, which is seeking to unite the party behind its candidate for the US presidency, Donald Trump.

The day ended in controversy when passages of the keynotes speech given by the billionaire's wife, Milania, were found to bear a striking similarity to the address delivered by Michelle Obama, when her husband won the democratic party nomination eight years ago.

These are Michelle's words followed by Melania's.

Michelle
Barack and I were raised with so many of the same values, like you work hard for what you want in life...

Melania
...the values that you work hard for what you want in life...

Michelle
...that your word is your bond, that you do what you say you’re going to do...

Melania
...that your word is your bond, and you do what you say and keep your promise...

Michelle
...that you treat people with dignity and respect...

Melania
...that you treat people with respect...

rip off
steal something or copy something

You need a noun to talk about something which is not worth the money you paid for it.

Help
Sian says that the car she bought recently is ______ .
a a rip-off V2VsbCBkb25lLg==
b ripped off U29ycnksIHlvdSBuZWVkIHRoZSBub3VuIGhlcmUu
c plagiarised U29ycnksIFlvdSBuZWVkIGEgbm91biB0byB0YWxrIGFib3V0IHNvbWV0aGluZyB3aGljaCBpcyBub3Qgd29ydGggdGhlIG1vbmV5IHlvdSBwYWlkIGZvciBpdC4=

What did Sian say was the opposite of a 'striking' similarity?

You need a word which means 'to copy someone else's words'.