What will happen to the monster and its creator, Victor Frankenstein?

What will happen to Frankenstein and the monster?
How do you think the story will end?

Watch the video to find out which option is correct. And listen out for four more uses of make. 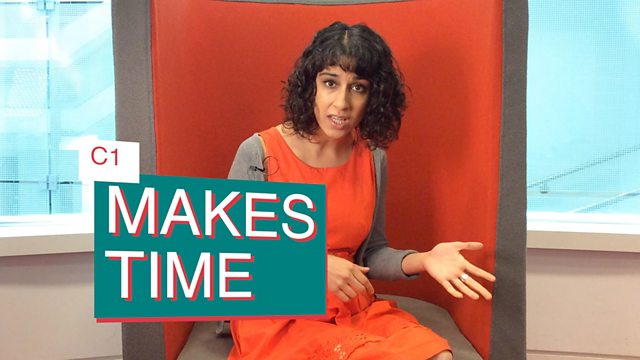 Mariam
Hello again. I'm Mariam. Let's return to the story about a monster who is seeking revenge and its stressed out creator, Victor Frankenstein.

Moving on in the story, Victor is in Geneva and is about to get married to the beautiful Elizabeth. However there's a problem:  the monster has threatened to turn up at his wedding and Victor is scared that he is going to kill him. But, oh no, Victor hears a scream. He goes to investigate and finds his bride has been killed and sees the monster running away.

This makes his blood boil and he makes up his mind to devote the rest of his life to catching the monster and seeking his revenge. He eventually tracks him down in the snowy and icy north but the monster escapes.

By now, Victor is exhausted but he is rescued by a captain of a ship heading to the North Pole. The captain doesn't know what to make of his story but he looks after him. Sadly, however, his fever worsens and he dies.

Later the captain makes time to go and visit his body and there he finds the monster crying. He tells the captain about his suffering and also his guilt over the damage he has caused. The monster then runs off back to icy northern lands to die – like his creator, his suffering is over.

An emotional ending and certainly not a happy one – but I hope you enjoyed this story and I hope you'll join me soon for another one soon. Bye.

So, the correct answer was D) Something else - Victor dies of fever while searching for the monster and the monster feels guilty and disappears to die alone. What an unhappy ending!

We've made this quiz to help you practise the different uses of make. Have a go!

V2lsbCB5b3UganVzdCBtYWtlJm5ic3A7dXAmbmJzcDt5b3VyJm5ic3A7bWluZCEgV2hlcmUgZG8geW91IHdhbnQgdG8gZ28gb24gaG9saWRheSB0aGlzIHllYXI/IElmIHlvdSBzcGVuZCBtdWNoIGxvbmdlciBkZWNpZGluZywgZXZlcnl0aGluZyB3aWxsIGJlIGZ1bGx5LWJvb2tlZCE=
Will you just {{}}! Where do you want to go on holiday this year? If you spend much longer deciding, everything will be fully-booked!

You need an expression that means 'finally decide'.

Help
Will you just
select
! Where do you want to go on holiday this year? If you spend much longer deciding, everything will be fully-booked!
Well done!
Sorry, you need an expression that means 'finally decide' - and this isn't it.
SXQgbWFrZXMmbmJzcDtteSZuYnNwO2Jsb29kJm5ic3A7Ym9pbCB3aGVuIEkgc2VlIGhvdyBtdWNoIHBsYXN0aWMgaXMgZHVtcGVkIGluIHRoZSBvY2VhbiAtIEkgZ2V0IHNvIGFuZ3J5Lg==
It {{}} when I see how much plastic is dumped in the ocean - I get so angry.

You need a phrase that means 'makes me very angry'.

Help
It
select
when I see how much plastic is dumped in the ocean - I get so angry.
Well done!
Sorry - you need a phrase that means 'makes me very angry'- and this isn't it!
SSdkIGJldHRlciBtYWtlJm5ic3A7YSZuYnNwO3N0YXJ0IG9uIGRpbm5lcjsgcGVvcGxlIHdpbGwgYmUgYXJyaXZpbmcgc29vbiBhbmQgdGhlIG1lYXQgd2lsbCB0YWtlIGEgY291cGxlIG9mIGhvdXJzIHRvIGNvb2sh
I'd better {{}} on dinner; people will be arriving soon and the meat will take a couple of hours to cook!

You need a phrase that means 'begin to do something'.

Help
I'd better
select
on dinner; people will be arriving soon and the meat will take a couple of hours to cook!
Good job!
Sorry, you need a phrase that means 'begin to do something' - and this isn't it!
RXZlbiBpZiB5b3UncmUgcmVhbGx5IGJ1c3ksIGl0J3MgaW1wb3J0YW50IHRvIG1ha2UmbmJzcDt0aW1lIGZvciBleGVyY2lzZS4=
Even if you're really busy, it's important to {{}} for exercise.

You need a phrase that means 'find spare time to do something'.

Help
Even if you're really busy, it's important to
select
for exercise.
Well done!
Sorry - you need a phrase that means 'find spare time to do something' - but this isn't it!
V2hhdCBkbyB5b3UgbWFrZSZuYnNwO29mIGhlciBhcG9sb2d5PyBJIHJlYWxseSBkb24ndCBrbm93IGlmIHNoZSdzIGJlaW5nIHNpbmNlcmUgb3IganVzdCB0ZWxsaW5nIG1lIHdoYXQgSSB3YW50IHRvIGhlYXIh
What do you {{}} her apology? I really don't know if she's being sincere or just telling me what I want to hear!

You need a phrase that means 'understand the meaning of'.

We asked you to tell us a story using as many of the phrases with make as possible:

Yesterday, my cat tried to make a cake by himself. He went to the kitchen and made it as a place after wars. Even though he could open the cabinet, he could not carry any powder properly. All flour spread everywhere in the kitchen. He even made matters worse with his white footprints on the TV, sofa and my favourite bed. When I made for catching him, he made a start and jumped out of the house by the window. He really made my blood boil. I did put notes of how to use the kitchen in a right way on the fridge's door. I guess he did not make of the meaning of those notes. What a silly cat! Finally, I made up my mind to teach him how to understand notes. We now make time to eat cakes together. The cat made a name for himself after that incident. We have called him "trouble-make-cat" until now.

Banda is a young carpenter who lives in a beautiful village. He is so skilled. He makes wonderful pieces of furniture and decorates them with beautiful carvings of flowers, birds, butterflies and many other things. The carvings seem to be so real that everyone admired. His great talent has made a name for himself in the village.

He is quite happy but only one thing makes his mind bother. He feels so lonely and wants to find a suitable girl to marry. It is not very easy as many girls are not kind-hearted although they seem to be. He makes for all the near by villages but he fails to find someone he can love.

Sadly, he makes up his mind and takes a big piece of wood. He makes a start to carve a figure of a woman out of it. It is the figure of the woman he expects for. When the work is finished it seems to be a real young woman. However, Banda is not so happy. He wishes how wonderful if she was a real woman.

Meanwhile, the king of the country is going on a journey as he makes time for some leisure. When he is going through this village, he sees the beautiful figure of this young woman. To make matters worse, the king was enchanted by the figure and orders his servants to bring her to him. The servants come and tell that it is not a real woman but a figure made out of wood. This makes his blood boil and orders to bring the creater who carved this as the figure is more beautiful than any women he has seen. When Banda is brought to him, he tells the king why he carved it. Fortunately, the king makes of that Banda is not only innocent, but also knows how to admire the beauty of a woman. So the king orders him to marry his young beautiful daughter, the princess.

Over the last five decades I have made a name for myself by fighting criminals and terrorists from all around the world and foiling international plot against my home country, England. Before I make a start on a new mission I am summoned by my boss for instructions. My job makes my life very exciting and causes me to make for many countries. I can also drive expensive fast cars and bump into beautiful women. Sometimes international spies make my blood boil and to make matters worse they even shoot at me. Fortunately, thanks to my state-of-the-art devices made by my government I always manage to find a way out. Obviously, it’s even a stressful life, therefore sooner or later I will have to make my mind up and make time to relax on a beach and enjoy a good meal (italian cooking, of course). What’s my name? You should know it by now: my name is Bond, James Bond.

If I make a mistake,I prefer to apologize for it. I just don't want to make people suffering. I guess that it's always better to make a start on a friendly conversation than to argue. Without doubts, arguing makes matters worse. I appreciate when people make for understanding each other. Offense makes our blood boil and we are not able to make up our mind to make a right decision.

BBC Learning English says:
Thanks for your story Iryna! The phrase 'make for understanding' doesn't sound very natural though. You could change it to 'make an effort to understand' - that would work well in your story.

Hello, this is Zaemisch from Colombia. I’m glad you enjoyed my last piece about Nathanael on the uses of break story.

Nevertheless, next year wasn’t a good time for Nathanael. It was raining heavily a morning during a game, when he fell over and, sad to relate, he injured his knee. Nathanael did a try to keep playing, but it just made matters worse.

Team’s coach made up his mind to get Nathanael out of the game, and he took him to hospital, where doctors couldn’t make of [BBC Learning English says: this should say make out] the reason for such an injure. Nathanael’s mother had to make time at her work to go and see her son at hospital, although this news made her bad boss’s blood boil.

Nathanael’s mum made for hospital, where, thanks God, Nathanael already made a start on walking by his own.

Thanks a lot for reading my piece, bye!

That's the end of Session 4. In session 5, Tim's in the pronunciation workshop. Don't miss it!