Turkey and the US argue over the fall in the Turkish lira while the world watches nervously.

Turkish lira falls: who's to blame?

Following a series of dramatic falls in the value of the Turkish lira, the White House says it is monitoring the situation and that the US is not to blame, whilst the Turkish president accuses the US of treacherous behaviour.

Complete this idiom: stab someone in the... 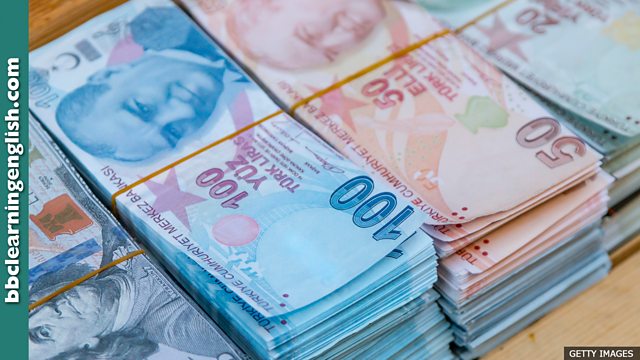 A White House economic advisor has said the Trump administration is monitoring the financial situation in Turkey very closely following the dramatic falls in its currency.

Kevin Hassett said the sell-off could not have been prompted by additional US tariffs on Turkish steel and aluminium exports as the sector made up only a tiny part of Turkey's economy.

President Erdogan has accused the United States of "stabbing his country in the back".

jitters
feelings of nervousness or anxiety
• Everyone gets jitters before an exam. Don't worry. You'll do well.
• He's nervous. Speaking in public gives him the jitters. I'll make him a cup of tea.

overblown
made more important than it should be
• Reports are talking about large numbers of people, but I think they are overblown.
• She's got such an overblown ego! She thinks she's the best at everything!

Think about a dance!

Help
Which of this phrases is NOT normally used in British English?
a Have the jitters VGhhdCdzIG5vdCByaWdodC4gJ0hhdmUgdGhlIGppdHRlcnMnIGlzIGEgY29tbW9uIEVuZ2xpc2ggcGhyYXNlLg==
b Get the jitters VGhhdCdzIG5vdCByaWdodC4gJ0dldCB0aGUgaml0dGVycycgaXMgYSBjb21tb24gRW5nbGlzaCBwaHJhc2Uu
c Do the jitters V2VsbCBkb25lISBZb3UgY2FuICdkbyB0aGUgaml0dGVyYnVnJyAtIGEga2luZCBvZiBkYW5jZSAtIGJ1dCAnZG8gdGhlIGppdHRlcnMnIGlzIG5vdCBhIGNvbW1vbiBFbmdsaXNoIHBocmFzZS4=
d Give someone the jitters U29ycnksIHRoYXQncyB3cm9uZy4gJ0dpdmUgc29tZW9uZSB0aGUgaml0dGVycycgaXMgYSBjb21tb24gRW5nbGlzaCBwaHJhc2Uu

There is a letter 'x' in this word.

This word can be used in many different situations, with no change in meaning.