Emergency services in Greece are dealing with wildfires which have led to the deaths of at least 24 people. Some people have been evacuated from a beach near Athens where they had gone to escape the flames

To move from a place of danger to safety is to…

a) desert
b) expel
c) evacuate 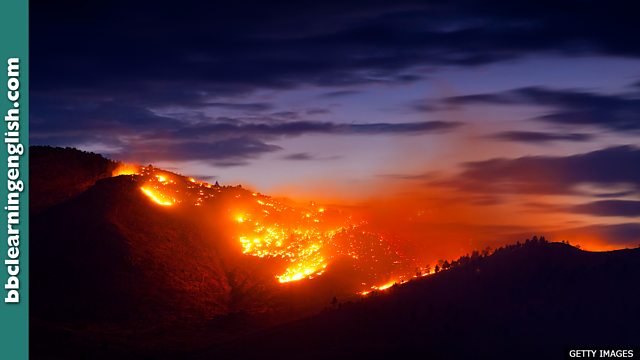 Greek emergency workers have used boats and helicopters to evacuate people who'd taken refuge on a beach to escape a deadly wildfire near Athens.

At least 24 people have been killed by the flames. There are unconfirmed reports of many more dead.

The authorities have appealed for help from other European Union countries.

sweep
move quickly and powerfully
• Initial reports suggest the flood will sweep across the north of the country.
• Fidget spinners are a fad that recently swept the nation. Everyone had one.

flee
escape from danger quickly
• People near the suspected bomb began to flee to the nearest place of safety.
• When the police attempted to arrest the criminal, he fled across the border.

gut
destroy the inside of a building
• Now the house is mine, I'm going to gut it and completely redecorate it.
• I was gutted to find out that I hadn't passed my driving test. I studied so hard!

'Gut' means 'destroy or remove the inside of something'.

'Sweep' is a verb of movement.