Donald Trump and Kim Jong-un have met in Singapore to discuss reducing nuclear weapons. It's the first time a sitting US president and the leader of North Korea have met.

Trump and Kim in historic meeting

US President Donald Trump and the North Korean leader Kim Jong-un have met in Singapore.

It's the first time a meeting between the leaders of the two countries has ever taken place.

An agreement on nuclear weapons was signed.

If something is irreversible, it… 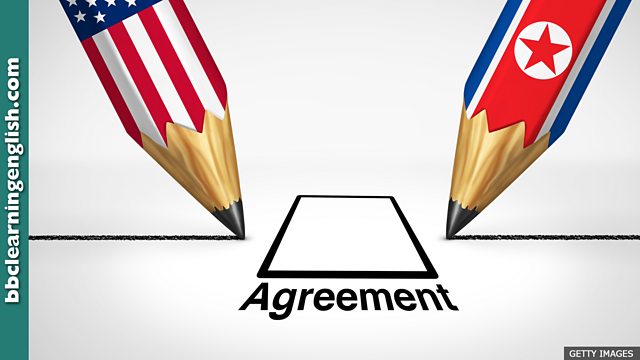 President Trump and Kim Jong-un have signed a joint agreement after their unprecedented talks in Singapore.
Mr Trump said he was "very proud of what had been achieved."

Mr Kim said "the world will see a major change."

Copies of the document are about to be distributed to the press.

The United States has been insisting on complete, verifiable and irreversible denuclearisation of North Korea.

How dominant is an alpha male personality?

Help
Ken's such an alpha male. He always ______.
a feels happy with the decisions of others. VGhhdCdzIG5vdCByaWdodC4gQW4gYWxwaGEgbWFsZSBpcyBkb21pbmFudCBhbmQgbGlrZXMgdG8gYmUgaW4gY2hhcmdlLiA=
b gets his own way. V2VsbCBkb25lIQ==
c avoids making decisions. VGhhdCdzIG5vdCByaWdodC4gQW4gYWxwaGEgbWFsZSBpcyBkb21pbmFudCBhbmQgbGlrZXMgdG8gYmUgaW4gY2hhcmdlLiA=

Do we use this as a verb?

Help
Zuzka and Jana can't agree on anything, so they often ______.
a showdown VGhhdCdzIG5vdCByaWdodC4gJ1Nob3dkb3duJyBpc24ndCB1c3VhbGx5IHVzZWQgYXMgYSB2ZXJiLg==
b have a show down. QWxtb3N0IGJ1dCBub3QgcXVpdGUgcmlnaHQhICdTaG93ZG93bicgaXMgb25lIHdvcmQnLg==
c have a showdown. V2VsbCBkb25lIQ==

b) can't return to its previous state