Unit 18: News Review
How to use the language from the latest news stories

The EU and US are considering sanctions after Belarus forced a plane carrying a dissident journalist to land. Learn vocabulary to talk about this news story.

Western countries have condemned Belarus for diverting a plane flying over its territory to arrest a Belarusian opposition journalist. EU leaders were due to discuss their response to what the union's executive called a "hijacking" and the US state department said was "a shocking act".

Belarus scrambled a fighter jet to force the plane - bound for Lithuania - to land, claiming a bomb threat. Police came and took Roman Protasevich away when passengers disembarked. 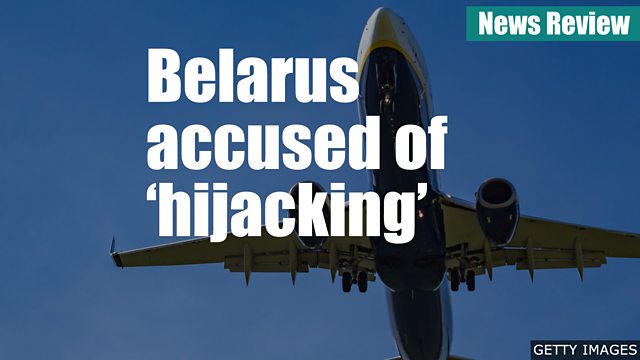 The Ryanair flight from Athens was approaching Lithuanian airspace when it suddenly changed direction. The airline says it was notified by Belarusian air traffic control of a potential security threat and told to divert to Minsk airport.

The defence ministry of Belarus even sent up a MiG-29 fighter jet to accompany the flight - and it says, to ensure it landed safely. But after an extensive search on board, nothing suspicious was found. Instead, Roman Protasevich, a well-known Belarusian opposition journalist, was arrested.

condemn
say publicly that something is morally wrong

• We must condemn acts of racism in order to stop it in the future.
• The government condemned the street violence.

outcry
strong expression of anger at an action

• There was an outcry after the school banned mobile phones.
• Following an outcry from fans, the writer changed the ending of her latest novel.

exiled
forced to live in another country for political reasons

• London in the 1800s was full of exiled political thinkers like Karl Marx.
• Living in exile can be a very lonely experience.

Help
Following an ________ from fans, the writer changed the ending of her latest novel.
a condemn U29ycnksIHRoYXQncyBub3QgY29ycmVjdC4=
b outcry V2VsbCBkb25lISBUaGF0J3MgY29ycmVjdC4=
c exiled VGhhdCdzIG5vdCBjb3JyZWN0Lg==

Which expression means 'said publicly that something is morally wrong'?

Which expression means 'forced to live in another country for political reasons'?