Unit 13: News Review
How to use the language from the latest news stories

Some tourists had a lucky escape after getting stuck on Britain's highest mountain in freezing weather. Neil and Georgina teach you the language the world's media is using to discuss this story.

Tourists who attempted to climb Ben Nevis in winter wearing trainers have been rescued. Neil and Georgina look at the vocabulary in the news around this story. 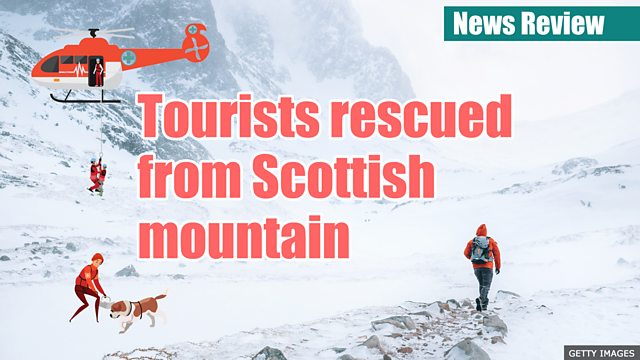 The group of four were found by Lochaber Mountain Rescue Team in an ice-bound gully. The team said they could easily have fallen hundreds of feet. They did not have ice axes or crampons, which are essential for winter climbing. They had no map, and three of them were wearing trainers.

clowns
people who behave in a silly way

bunch
group of things of the same type gathered together

cut them some slack
be less critical of them

Does 'clown' have a wider meaning?

Help
True or false? The tourists who climbed the mountain were wearing curly wigs and red noses.
a True U29ycnksIHRoYXQncyBub3QgY29ycmVjdC4gJ0Nsb3duJyBjYW4gYWxzbyBiZSB1c2VkIHRvIHJlZmVyIHRvIGEgcGVyc29uIHdobyBoYXMgZG9uZSBzb21ldGhpbmcgc2lsbHku
b False V2VsbCBkb25lIQ==

Think about the expression "bunch of idiots"...

Help
"I'd like to introduce a bunch of business people who've come to visit us from Japan." Is this sentence too formal, too informal, or just right?
a too formal U29ycnksIHRoYXQncyB3cm9uZy4gJ0J1bmNoJyBpcyB1c2VkIGluZm9ybWFsbHkgdG8gcmVmZXIgdG8gYSBncm91cCBvZiBwZW9wbGUu
b too informal V2VsbCBkb25lISAnQnVuY2gnIGlzIHVzZWQgaW5mb3JtYWxseSB0byByZWZlciB0byBhIGdyb3VwIG9mIHBlb3BsZS4=
c just right U29ycnksIHRoYXQncyB3cm9uZy4gJ0J1bmNoJyBpcyB1c2VkIGluZm9ybWFsbHkgdG8gcmVmZXIgdG8gYSBncm91cCBvZiBwZW9wbGUu

Don't be so critical!