The US state of Baltimore says that witnesses and evidence were manipulated, leading to the men being imprisoned for a crime they did not commit. Catherine and Dan teach you the language the world's media is using to discuss this story.

The US state of Baltimore says that witnesses and evidence were manipulated.

Which word means ‘forcefully persuade someone to do something'?

a) coerce
b) contrive
c) conduce 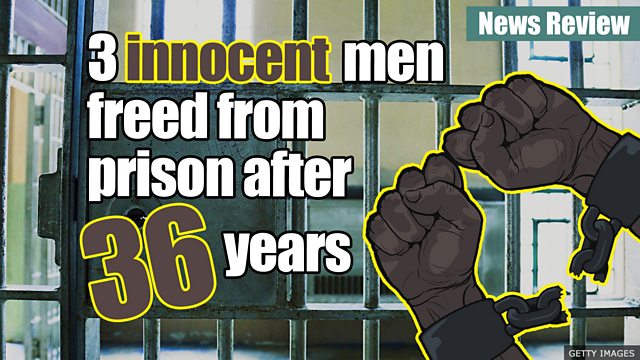 Three men in the American state of Maryland have been exonerated after spending 36 years in prison for a crime they didn't commit. Alfred Chestnut, Ransom Watkins and Andrew Stewart were 16 when they were arrested on suspicion of murdering a 14-year-old boy in Baltimore. Baltimore's state attorney said detectives had coached and coerced teenage witnesses and evidence from the boys lawyers and the jury.

exonerated
officially proven not to be responsible for a wrongdoing

• A woman was exonerated of theft after new evidence was presented at an appeal.
• The judge exonerated the men and apologised for their treatment.

behind bars
in prison

• If you are convicted of a serious enough crime, you will be put behind bars.
• My uncle spent time behind bars in the 1980s. Now he's a security consultant!

• After their wrongful arrest, they were released within 24 hours.
• He sued his former boss for wrongful dismissal and won the case..

The first part of the correct answer is the opposite of 'right'.

The correct answer begins with the letter 'e'.

Help
What's the correct spelling of this word, which means 'proven not to be responsible for a wrongdoing'?
a axonerated U29ycnksIHRoZSB3b3JkICdleG9uZXJhdGVkJyBiZWdpbnMgd2l0aCB0aGUgbGV0dGVyICdlJywgbm90ICdhJy4=
b exonerated V2VsbCBkb25lIQ==
c exonereted U29ycnksIHRoZXJlIGFyZSBvbmx5IDMgbGV0dGVyICdlJ3MgaW4gJ2V4b25lcmF0ZWQnLg==

All the prisons in the UK belong to Queen Elizabeth II.