England-Bulgaria Euro 2020 football match comes close to being stopped due to fans' racist behaviour. Catherine and Dan teach you the language the world's media is using to discuss this story.

Which of these phrasal verbs means to ‘cancel a planned event’? 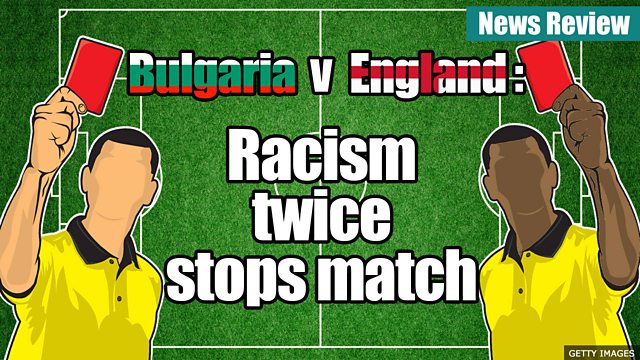 Racism has overshadowed a football match between England and Bulgaria in Sofia. The referee stopped the game twice in the first half after Bulgarian fans directed racist chants and gestures towards the black English players Raheem Sterling and Tyrone Mings. The match came close to being called off completely. England won 6-0.

overshadowed
made to seem less important than something else

• The wedding was overshadowed by several people getting food poisoning.
• Feeling overshadowed, Steph changed her name to escape her family's legacy.

• As the comedian left the stage, he made a lewd gesture that the audience applauded.
• "I will not tolerate lewd gestures from pupils," said the teacher.

(as) clear as day
easy to see or understand

There is a letter 'w' in the first word.

Part of this word means 'a dark shape caused by light being blocked from reaching a surface'.

Which of these is dark, soft and sticky - mud, mustard, or nails?