A British teenager's eyesight has been severely damaged by his diet of chips and crisps. Dan and Catherine teach you the language the media is using to discuss this story.

A teenage boy in the UK has severely damaged his eyesight after living on mainly chips and crisps for most of his life.

In US English, they say ‘potato chips’. In UK English, we say: 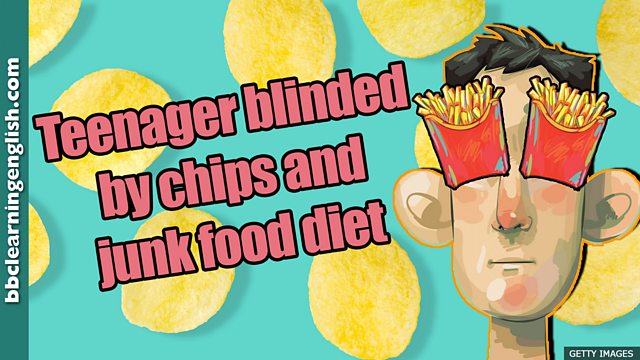 Experts are warning about the dangers of fussy eating. It's after a medical journal reported the case of a 17-year-old who suffered severe damage to his eyesight after living on a diet of chips and crisps since leaving primary school. Tests have revealed he had severe vitamin deficiencies and malnutrition.

• I went blind due to a bike accident I had when I was younger.
• When she opened the fridge, the smell made her realise that the milk had gone off.

• I can be very fussy about who I date. That's why I'm single. I don't want just anyone.
• He used to be such a fussy eater, but now he's an adult he'll eat anything.

deficiency
not having enough of something

• Due to excessive use, the Earth could soon have a resource deficiency.
• Due to a deficiency in available staff, the shop will be closing early today.

Which prefix means 'not' or 'without'?

Think about changing an existing situation to a worse situation.

Help
Which sentence uses the verb 'go' in a way that does NOT mean 'become'?
a I can't eat that fish. It's gone off. U29ycnkhIElmIGZpc2ggJ2dvZXMgb2ZmJywgaXQgYmVjb21lcyBiYWQgc28gdGhhdCB5b3UgY2FuJ3QgZWF0IGl0Lg==
b I'm going out for dinner with my friends tonight. V2VsbCBkb25lISAnR28gb3V0JyBpbiB0aGlzIGNvbnRleHQgbWVhbnMgJ2xlYXZlIGEgcm9vbSBvciBidWlsZGluZyBpbiBvcmRlciB0byBkbyBzb21ldGhpbmcgdGhhdCBpcyBlbnRlcnRhaW5pbmcnLg==
c Don't listen to very loud music on your headphones for extended periods - it can make you go deaf. U29ycnkhIElmIHlvdSAnZ28gZGVhZicsIHlvdXIgc2Vuc2Ugb2YgaGVhcmluZyBjaGFuZ2VzIHNvIHRoYXQgeW91IGNhbid0IGhlYXIgYW55IG1vcmUu

A fussy person is extremely particular about certain things.