Hong Kong's leader says she will set up a mechanism for dialogue following peaceful protests. Catherine and Dan teach you the language the world's media is using to discuss this story.

Hong Kong to establish a 'platform for dialogue'

Following peaceful protests over the weekend, Hong Kong's leader, Carrie Lam, has promised to create a mechanism for dialogue.

Which of these means 'happening or developing slowly or gradually'?

a) creeping
b) nagging
c) striking 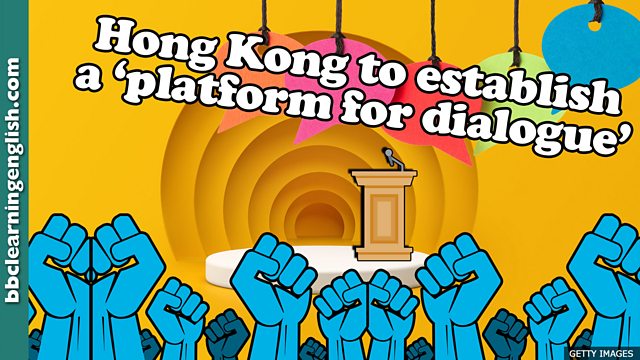 After weeks of anti-government protests in Hong Kong, the territory's leader, Carrie Lam, has said she wants to listen to what people have to say. Demonstrations against creeping Chinese mainland influence over Hong Kong have escalated since mid-June.

• Their government shuns any organisation that deals in weapons.
• If you care about the environment, you will shun plastic where possible.

olive branch
action taken as an attempt to end a disagreement

concessions
things given to reach an agreement

• The company made pay concessions to its staff.
• They made a diplomatic concession as an act of goodwill.

There are two letter 'c's in this word.

One of the phrasal verbs doesn't go with 'an olive branch'.