Have you ever wondered when to use 'the' with public buildings? Watch Phil explain in this English In A Minute.

At school vs At the school

Let Phil teach you when we say 'the' to talk about public buildings in this English In A Minute. 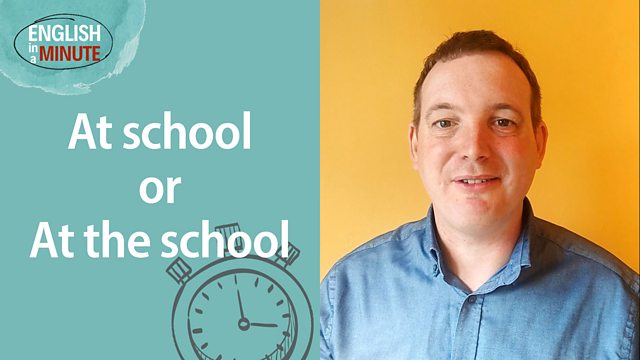 I'm going to tell you how we use the with public buildings.

Often, when we talk about public buildings with prepositions of place, what we're really talking about is the main reason that people go there.

If you're at school, at college or at university, you're studying.

Now in British English, if that's what you're doing, don't use the with the name of the building.

Here are some other examples:

If you're in hospital, you're ill.
If you're at church, you're praying.
And if you're in court or worse - in prison, you're in trouble.

If we do use the in these expressions, then it probably means somebody's doing something else.

Natasha's at the hospital - she's visiting her brother.

I'll meet you at the school, then we'll go to the party.

Now it's not every public building - it only works for some, but if you're talking about the most common activity, don't use the.

If you're talking about something else, you can.

At school vs at the school

We often use a prepositions of place with public buidlings when talking about the main reason that people go there. We normally don't use the in this case.

We often use 'the' in front of a public buidling when talking about an alternative activity to the normal reason that people go there.

Which is the correct sentence?

Is it always the rule?

Help
How often do you use 'the' in front of public buildings when not talking about its main purpose?
a always U29ycnkuIFRoYXQncyBub3QgY29ycmVjdCEgUGhpbCBtZW50aW9uZWQgdGhlcmUgYXJlIHNvbWUgZXhjZXB0aW9ucy4=
b never U29ycnkgLSB0aGF0J3Mgbm90IHJpZ2h0IQ==
c sometimes V2VsbCBkb25lIC0gdGhhdCdzIGNvcnJlY3Qh

What is the rule here?