Do you have a minute to spare to learn some English? Never before has inversion been explained so quickly! Dan tells us how to do it! Give us 60 seconds and we'll give you the English! 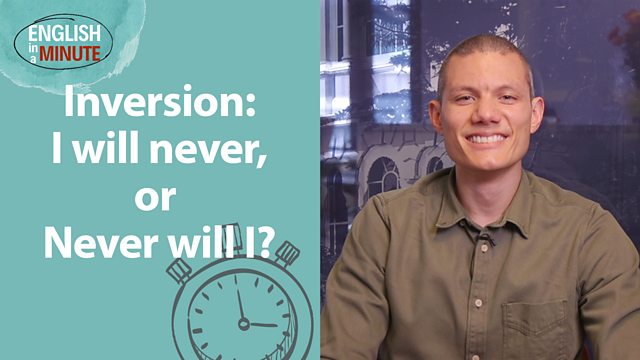 Dan
Never before – probably – has inversion been explained so quickly or so simply, so pay attention because that's what we're doing .

Inversion is something we do in English for emphasis, formality or style.

Never is a negative or limiting adverb. Other examples are: rarely, hardly and not often.

First move the negative adverb to the beginning of the sentence. Then invert, or swap, the order of the subject and auxiliary verb. Never will I dance.

If your sentence is affirmative and doesn't have an auxiliary verb – for example, the present or past simple - then add one. Rarely do I wake up on time.

Remember, it's for emphasis! So only do it for a good reason.

What is it?
Inversion involves changing the normal word order of sentences for stylistic reasons, usually in order to emphasise, sound dramatic or increase formality. There are different types of inversion. This page concerns inversion after a negative or limiting adverb.

Negative or limiting adverbs
Negative and limiting adverbs are a group of adverbs which limit the meaning of a verb or make it negative. Examples are never, rarely, hardly, not often, etc.

How
To invert a sentence move the adverbial to the beginning of the sentence and invert (swap) the subject and auxiliary verb:

No auxiliary verb
In cases where the tense does not use an auxiliary verb in the affirmative, such as the present simple or the past simple, one must be added.

We use negative or limiting adverbs for inversion

If an affirmative sentence doesn't have an auxiliary verb, add one!