Welcome to English In A Minute. Give us a minute and we'll give you a hot tip about English. Grammar, vocabulary... there's so much to learn - and all taught by your favourite BBC Learning English staff!

Do you have a minute to spare to learn some English? Let Kee keep you in the know about the differences between while and during! Give us 60 seconds and we'll give you the English! 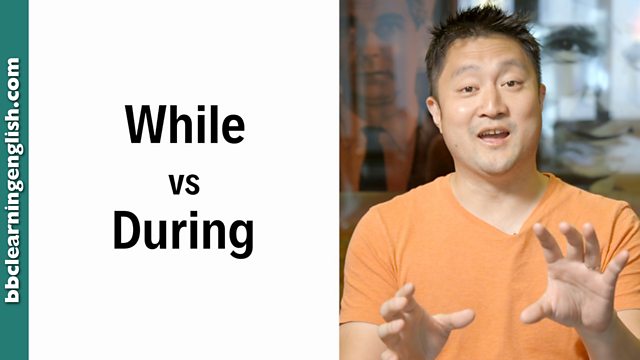 Kee
Hi! This is Kee from BBC Learning English, and today, I'm going to tell you the differences between while and during.

We can use while and during to say that a shorter event happened within a longer event. They mean the same, but the grammar's different.

After while, we have a clause. A clause is a group of words containing a subject and a verb. So we can say: While I was having lunch, my phone rang. Remember that the verb in the while clause is usually in an ING form.

We can also use while with just an ING form. So we can say: While having lunch, my phone rang. So we remove the subject and the 'be' verb.

However, during is different because it can only be used with a noun phrase. So we can say: During lunch, my phone rang. We cannot use a clause or just the ING form.

So, same meaning, but different grammar!

Same meaning
While and during can mean the same thing, but their grammar is different. This is because while is a conjunction, but during is a preposition.

While
After while we use a clause. A clause is a group of words that contain a subject and a verb - for example: She ate. Remember, the verb that follows while is usually an ING verb.

It is also possible to use while with just an ING verb.

During
During must be followed by a noun phrase.

Which two things does every sentence in English need?

Help
What is a clause?
a A subject and a verb V2VsbCBkb25lISBBIGNsYXVzZSBpcyBhIGdyb3VwIG9mIHdvcmRzIGNvbnRhaW5pbmcgYSBzdWJqZWN0IGFuZCBhIHZlcmIu
b A verb and an object U29ycnkhIFRoYXQncyBub3QgcmlnaHQhIEEgY2xhdXNlIGlzIGEgZ3JvdXAgb2Ygd29yZHMgY29udGFpbmluZyBhIHN1YmplY3QgYW5kIGEgdmVyYi4=
c A subject and an object U29ycnkhIFRoYXQncyBub3QgcmlnaHQhIEEgY2xhdXNlIGlzIGEgZ3JvdXAgb2Ygd29yZHMgY29udGFpbmluZyBhIHN1YmplY3QgYW5kIGEgdmVyYi4=

Do we need a full clause after 'while' or can we just use an ING form?

Do we follow 'during' with a clause or a noun phrase?