Do you have a minute to spare to learn some English? Let Phil explain the difference between even though and even if! Give us 60 seconds and we'll give you the English! 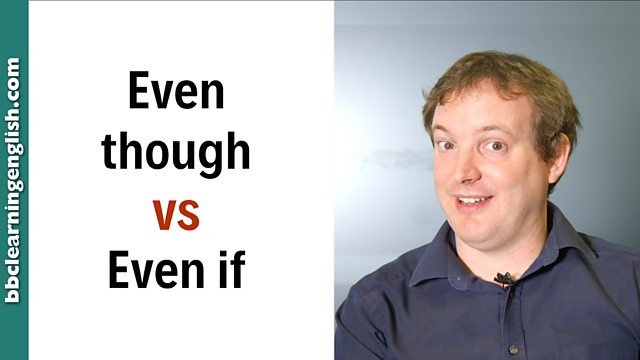 Hi, I'm Phil from BBC Learning English. Today, I'm going to tell you the difference between even though and even if.

Now, we use them both for emphasis but they don't mean the same.

We use even if to introduce something hypothetical, so it might not be real. Even if it's sunny when we're in Scotland, I'm not going swimming. Even if you paid me, I wouldn't watch that film.

Even though they look the same, they are different – even if you didn't notice at first!

Even though
Even though introduces something that's true, but may be unexpected. It's similar to despite.

Even if
Even if introduces something hypothetical, which means it may not be real.

Is this sentence real and possible or hypothetical?

It begins with a D

Are these future plans almost definite or do they sound like they are probably, but may not happen?