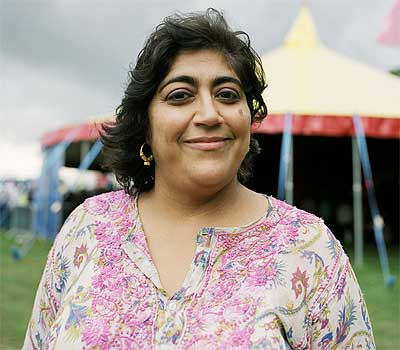 Gurinder Chadha
Previous Back to index

Gurinder Chadha is best known as the writer and director of Bend It Like Beckham.

The film's humour and charm delighted audiences around the world, but the process of making it was touched by sorrow - while Gurinder was writing the screenplay, her beloved father Bhajan passed away.

As with many people who have lost a parent, the death of Gurinder's father moved her to take more of an interest in her family's background, and to learn more about her own place within that story.

Gurinder was born in 1960 in Kenya, then a year later Bhajan took the decision to leave and make a new life for his family in Britain. Her family retains strong ties to Kenya, but nonetheless Gurinder feels British, a theme she tries to reflect in her work.

Her trail started in the Kenyan town of Kericho, where Gurinder's father Bhajan was born.

At the end of the nineteenth century, Britain took control of Kenya and set about developing the new colony using cheap labour from other, more established regions of the British Empire, such as India. Bhajan's father Bishen and two of his brothers were among the first to make the move.

In 1917, the brothers decided to go into business together. Since they were legally unable to buy land in the nascent colony - only white settlers were afforded that right - they instead set up a general trading store named 'BS Chadha and Sons', which catered for the needs of a steady influx of white tea-farmers and their predominantly black workforce.

One brother, Ladha, returned to India in 1920, while the other, Lakha, set up a mill in a quiet, remote area of the country called Lumbwa. Only Gurinder's grandfather Bishen decided to stay in Kericho and take his chances with the family shop.

Hungry for more information about the lives of her wealthy grandfather and his brothers, she learned that Lakha had died in 1936, after which Bishen had added his brother's mill to his business, helped out by his sons Mohinder and Bhajan after they had completed their studies.

According to a family rumour, Lakha had at one stage lived with an African woman, and had fathered two children with her. At the time this would have been regarded as deeply shameful, since colonial Kenya was bound by a rigid class system, with whites at the top, Indians in the middle and native blacks at the bottom of the heap.

Despite her best efforts, Gurinder was never able to track down this enigmatic relative, although she did find out that the rumour was in fact true.

The next step on Gurinder's journey was India, searching for clues about her family's history before her grandfather and his brothers moved to Kenya.

Bishen, her grandfather, was born in Dariala Jalib, a village about two hours drive from Jhelum, formerly a part of northern India, but now part of Pakistan. In 1947, Takar Devi journeyed to Dariala Jalib with five of their children to find suitable marriages for her daughters.

It was during the momentous and volatile period of the Partition of India. As Sikhs, Takar Devi and her family found themselves on the 'wrong' side of the newly created border. In constant danger and fearing for their lives, they were forced to travel for several days until they reached Panipat, to the north of Delhi.

For six months they remained as virtual refugees, surviving on pitiful amounts of food and water. Tragically, their youngest daughter died. Bishen scoured the country for his family and when he found them could not believe his eyes, so pale and thin had they all become.