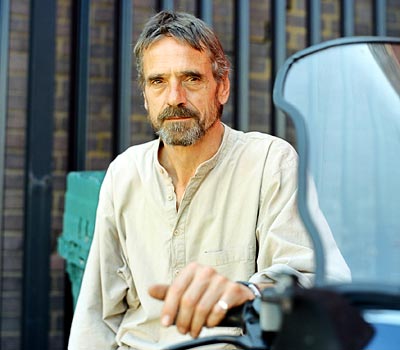 Jeremy Irons
Previous Back to index

Jeremy Irons lives in Ireland, and feels a natural affinity for the place, in particular to the area around Cork. But he doesn't know an awful lot about his background, other than a story that one of his ancestors rode to Westminster on a donkey to present a petition on behalf of the Chartists and was subsequently imprisoned in Newgate. In the hope of uncovering some colourful characters in his family tree, Jeremy started by talking to his family.

A cousin was the custodian of the family archives, including a sketch of his great great grandfather, Thomas Irons, who is believed to be the man with the donkey. His marriage certificate in 1840 shows that at the time of his marriage, his profession was 'policeman', one of London's first 'Peelers'. He signed up in 1828, but was eventually dismissed in 1834 for deserting his post and being drunk.

So was there a connection with Chartism? This was a political movement founded after the 1832 Reform Act when the vote was extended to the middle classes but not the working classes. The People's Charter (after which the Chartists were named) set out plans to widen the franchise and secure a more democratic voting system. The movement reached its height with a massive rally on Kennington Common on 10 April 1848, when a petition was delivered to parliament containing over two million signatures.

The petition had no effect, and disgruntled extremists turned to means other than peaceful rallies. On 16 August 1848, the Orange Tree and Powell Plots were exposed by an informer, Thomas Powell, who tipped the police off about a series of planned insurrections by militant Chartists. Among 14 men arrested at the Angel pub, Webber Street, was Thomas Irons. Weapons were found. The leaders were tried, found guilty and deported to Australia. Thomas was convicted as well, but because he didn't possess a weapon he was sentenced to 18 months in Newgate prison instead.

During his time inside, newspaper reports show that his wife and five children were supported by charitable donations from other Chartists. Yet it appears that in the end, Thomas abandoned them. By 1871 he was dead, having gone to sea as an engineer. His body was found in Rio.

Having solved the mystery of his rebellious great great grandfather, Jeremy decided to investigate his Irish heritage. He knew that his grandfather, Henry Sharpe, was born in Dublin in 1870, but moved to England when young because of financial difficulties. His parents were William and Katherine Sharpe, and it transpires that it was Katherine's family that was Irish, William having been born in Devon. Her father was Henry Loftie Rutton, but once again his trail lead back to England - this time to Kent. He had moved to Ireland and married his wife, Catherine, in 1843, buying land in Gilford, County Down, in the north. He had a very tough life. His first wife died young, and two of his adult children from his first relationship fell ill and died as well. He lost to further children from his subsequent marriage. His daughter Katherine was therefore his only surviving child.

Keen to find his Irish roots, Jeremy turned to Catherine's line. Her maiden name was McCreight, and her father William was also a landowner in Gilford. Jeremy was surprised to learn that William's father David had married Catherine Franklin of Cork, the same part of the world where Jeremy now lives. Further records showed a McCreight connection with Cork that went back to the start of the 18th century, including possession of a linen mill in Blarney that Jeremy visits. This finally overturned the myth that Jeremy is the quintessential English gentleman - his background is far more complex than that, and it appears he has carried on a long family tradition of Englishmen moving to Ireland to marry local women.