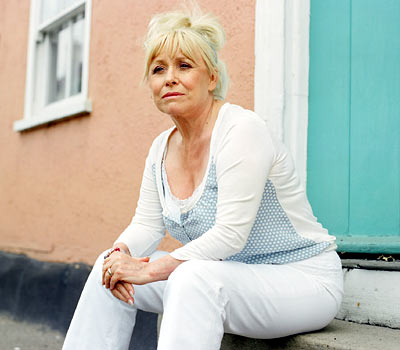 Barbara Windsor
Previous Back to index

From Carry On films to Eastenders, Barbara Windsor is one of the most glamorous denizens of the East End of London. Yet although she was born and brought up there, she knew very little about her true heritage - partly because her mother 'thought she was better than she was'. Consequently, Barbara wanted to know more about her East End roots.

There had always been a sense that her mother's family did not approve of her father's family, the Deeks, and rather thought she had married beneath herself. He was a barrow boy from the East End, while she was a dressmaker. Her father, Charlie Ellis, used to work in the docks - a major source of employment in the first half of the 20th century - and he moved from a casual labourer to permanent staff, which meant he'd moved from lower working class to working class. In comparison, the Deeks had a long tradition of hard-working women and hard drinking men in the family. Barbara's grandmother - affectionately known as Fat Nan - worked in a Pimms factory, but previously was on stage in the Britannia Theatre, Hoxton, when a teenager. Her mother, Emily Ewin, was a landlady at various pubs, holding the licence while her husband was away during the Great War. Emily also disapproved of her daughter marrying Barbara's grandfather, Jack Deeks, who drank quite a bit and worked as a costermonger selling fruit and veg from a barrow.

Life in the East End was tough during the mid- to late 19th century. John's father, John Golding Deeks, was a bricklayer and helped to build the East End. The area was a hive of industry but was overcrowded, with poor sanitation. Open sewers, mixed with fumes from local factories, made it a very unhealthy place to live. It was described as a living hell at the start of the 20th century. Bricklaying was a skilled yet seasonal occupation. There was always a problem finding work in the winter, and times would have been hard unless you managed your money carefully - not easy if you had a tendency to drink it all away in the summer. John Golding Deeks lived in one of the poorest areas, and a general depression of the building trade in the 1880s meant that by 1889 he ended up in the workhouse, where he remained on and off for the remaining 20 years of his life.

So Barbara decided to look for some glamour in her mother's side of the family. The trail led to Mary Ann Collins, her maternal great grandmother. She was a matchbox maker, living in another notorious slum, Old Nichol Street. Her parents came over to England from Cork, Ireland, between 1846 and 1851 to escape the potato famine, swapping the fresh air of the countryside for the squalor of London. Yet in many ways they were lucky. Up to a million people died in the famine, with a further two million emigrating. Barbara was shocked to discover that her great grandmother was the second Mary Ann Collins in the family. The first named child had died in 1851 of scarlet fever shortly after escaping the famine.

Yet there were further surprises in store for Barbara. Her maternal relatives weren't the only ones moving to London for economic reasons - her great great great grandfather, another bricklayer called Golding Deeks, originated from Bures, Suffolk, and moved to London to find work, also ending up having to claim poor relief. Yet he came from a relatively well off and educated family whose livelihood in the brick trade was killed off by the Industrial Revolution. His mother's maiden name was Golding, and by a quirk of fate one of her distant relatives was John Constable, the famous painter. He ended up living in luxury in Hampstead, while Barbara's ancestors were fated to endure the hardships of the East End.