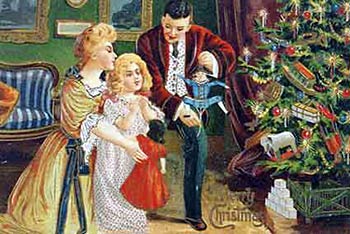 Gifts have been exchanged at Christmas and New Year for many centuries. By the early 20th century, the availability of a huge range of gifts for both children and adults had increased dramatically. The streets of London thronged with shoppers in the days up to Christmas, and the shops were open and ablaze with a riot of light and colour even on Christmas Eve.

Manufacturers and shopkeepers both large and small were keen to capitalise on the commercial potential of Christmas. Gamages, a vast department store in Holborn, offered nearly 500 pages of gifts in their Christmas Bazaar catalogue of 1913.

Children's gifts proved a particularly lucrative market, and the sheer variety of games, toys and other gifts thrilled Christmas shoppers. Some gifts were considered suitable for both sexes. These included rocking horses, wooden farmyard animals, board games, picture and adventure books, magic tricks, Noah's Arks and mechanical or stuffed animals.

In 1911, Gamages filled its window with stuffed animals made by Steiff, including the teddy bears which were hugely popular and became a symbol of the period. Other toys and games were targeted specifically at one sex or the other. For girls, skipping ropes and, of course, dolls were available in huge variety. Boys could expect toy soldiers and train sets.

Some of these gifts were left under the Christmas tree, but small treats could be left in a stocking to be filled by Father Christmas. This custom was derived from a Dutch tradition, whereby children fill their shoes with straw as a gift for Saint Nicholas's horse, in the hope that sweets will be left as a reward for their thoughtfulness. If they were deemed to have been naughty, they received nothing.

Stockings were generally hung by the fireplace but were also left at the end of beds, as one boy living in Shoreditch, in East London, described in 1881:

'Woke up early in the morning ... found a crammed stocking hanging helplessly over the side of my bed, for the next 10 minutes busily engaged in ransacking its contents which were 2 bags of sweets, a pocket knife, oranges, almonds and raisins, packets of sweets and 2 jockie's caps ...'.