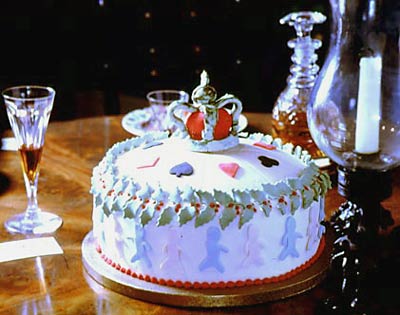 Twelfth Night, the 5th of January, has been celebrated as the end of the Christmas season since the Middle Ages. One of the most important days in the Christian calendar, Twelfth Night also marked the Feast of the Epiphany, when the three wise men, or Magi, arrived in Bethlehem to behold the Christ child.

The word 'epiphany' comes from the Greek word for manifestation, and was chosen because this was the night on which the Christ child, called 'the King of the Jews', was manifested to the Gentiles.

Most ancient writers agreed that there were three wise men. Over time they became known as the Three Kings - Caspar, Melchior and Balthazar. Caspar was thought to have brought the Christ child frankincense for divinity, Melchior gold for kingship and Balthazar myrrh for humanity.

The custom of offering these things as Epiphany gifts was common for centuries. In 1756, The Gentleman's Magazine reported that: 'His Majesty, attended by the principal officers at Court ... went to the Chapel Royal at St James' and offered gold, myrrh and frankincense'.

It is easy to see how kings and queens thus became the characters that traditionally represented Twelfth Night. During the 18th and 19th centuries, Twelfth Night parties were popular and usually involved games-playing, drinking and eating. A special Twelfth Cake, the forerunner of today's Christmas cake, was the centrepiece of the party, and a slice was given to all members of the household.

Traditionally, it contained both a dried bean and a dried pea. The man whose slice contained the bean was elected King for the night; a Queen was found with a pea. For the rest of the evening, they ruled supreme. Even if they were normally servants, their temporarily exalted position was recognised by all, including their masters.

By the early 19th century, the cake itself had become very elaborate, with sugar frosting and gilded paper trimmings, often decorated with delicate figures made of plaster of Paris or sugar paste. It remained the centrepiece of the party, although the bean and pea of earlier times were usually omitted.

Twelfth Night was popular until the late 19th century. As the antiquarian William Sandys then observed, 'Twelfth Night ... is probably the most popular day throughout the Christmas, thanks to Twelfth Cake and other amusements'.