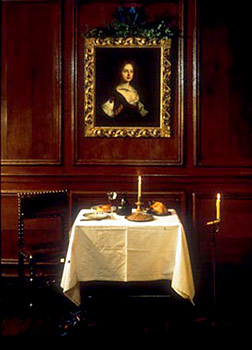 A simple Christmas dinner following the Puritan ban on festivities, recreated at the Geffrye Museum
Previous Back to index

The restrained restoration of Christmas

'More mischief is that time committed than in all the year besides ... What dicing and carding, what eating and drinking, what banqueting and feasting is then used ... to the great dishonour of God and the impoverishing of the realm.'

So wrote the strict protestant, Philip Stubbes, in the late 16th century, expressing the Puritan view that Christmas was a dangerous excuse for excessive drinking, eating, gambling and generally bad behaviour.

This view was made law in 1644, when an Act of Parliament banned Christmas celebrations. Viewed by the Puritans as superfluous, not to mention threatening, to core Christian beliefs, all activities to do with Christmas, both domestic and religious, including attending church, were forbidden. The ban, however, was unpopular and many people continued to celebrate privately, albeit in a far more restrained manner than in Elizabethan times.

A more openly festive, if slightly subdued, spirit returned following the restoration of the Monarchy in 1660. Old customs were revived, and Christmas as both a religious and social festival was celebrated throughout society. The writings of Samuel Pepys provide a fascinating insight into Christmas in London during the decade following the Restoration.

A civil servant best known today for his diaries, Pepys' observations about Christmas give us a feeling for what the season was like for Londoners at the time. In common with his contemporaries, Pepys worked on Christmas Eve, and often for part of Christmas Day itself. He attended church without fail on Christmas Day and, in 1660 and 1664, he went to both morning and evening services.

The Christmas meal was also an important part of the day. Pepys noted with pleasure, or otherwise, what he ate each Christmas. In 1662, he made do with 'a mess of brave plum porridge and a roasted pullet ...', a rather frugal meal owing to his wife's illness. This was supplemented by a bought, rather than home-made, mince pie.

In other years he enjoyed richer food, including a 'shoulder of mutton', and in 1666 'some good ribs of beef roasted and mince pies ... and plenty of good wine'. For entertainment, Pepys attended theatrical productions when possible, and read and played music at home. Visiting with friends and family was frequently mentioned.