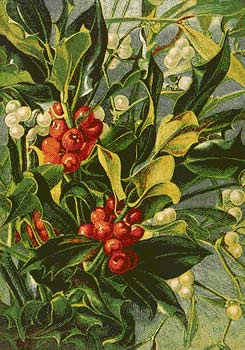 Illustration of the evergreens holly and mistletoe
Back to index

Pre-Christian, northern societies used to enliven the dark days of the winter solstice with a celebration of fire, light and jollity, to create relief in the season of nature's dormancy and to hurry along the renewal of springtime. Christmas, as the celebration of the birth of Christ, was also a winter festival which gradually incorporated many pagan traditions, one of which was the burning of fires to ward away dark and evil spirits.

The tradition of decorating the home with native evergreens is a truly ancient one. Since pagan times evergreens have been valued for their ability to retain signs of life in the middle of winter - even in some instances producing berries and flowers.

Early Christians displayed evergreen plants in the home to symbolise everlasting life. Holly, ivy and evergreen herbs such as bay and rosemary were the most commonly used, all with symbolic meanings that were familiar to our ancestors. Rosemary, for remembrance, and bay, for valour, are still well known. Holly and ivy were a particularly popular combination, the holly traditionally thought to be masculine and ivy feminine, giving stability to the home.

A kissing-bough was often hung from the ceiling. This would consist of a round ball of twigs and greenery, decorated with seasonal fruit, such as apples. It was the precursor to the bunch of mistletoe, under which no lady could refuse a kiss. Mistletoe was sacred to the Druids and was once called 'All Heal'. It was thought to bring good luck and fertility, and to offer protection from witchcraft.

In the medieval period, the Yule log was ceremoniously carried into the house on Christmas Eve, and put in the fireplace of the main communal room. Often decorated with greenery and ribbon, it was lit with the saved end of the previous year's log and then burnt continuously for the Twelve Days of Christmas, providing much needed light and warmth.