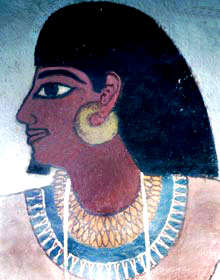 Image of Sennefer as portrayed in one of the wall paintings within his tomb on the west bank at Luxor.
Previous Back to index

Sennefer was the mayor of Thebes during the reign of Amenophis II (c.1427-1400 BC), near the middle of the Eighteenth Dynasty. His life is known mainly from his remarkable painted tomb on the west bank at Luxor. The burial-place of Sennefer is known as the Tomb of the Vines. This is because of its most distinctive feature - the ceiling of the main chamber is left irregular, painted over with bunches of grapes. The effect makes viewers feel they are looking up under the canopy of a cool vineyard. It is no surprise that Sennefer's proudest title is that of Overseer of the Gardens of Amun.

Amun was the god of Thebes, with his principal sanctuary at Karnak .The ruins of this place eventually covered an area the size of the financial City of London. In Sennefer's day it had not reached this size but was still impressive, with correspondingly grand gardens. A vignette of part of the estate occupies one wall of the Tomb of the Vines. It was walled, reached by means of a waterway, with tunnels of trellised vines separating different gardens. The text accompanying the picture ascribes the building of the garden to the ruling monarch, who would certainly have approved such a project, but the inspiration would have been Sennefer's, as is confirmed by the ingenuity that went into the design of his tomb.

Sennefer, whose other title is Mayor of Thebes, is shown on the pillars of his tomb wearing an amulet in the form of a double heart, inscribed with the name of his sovereign. This indicates his loyalty to his king, and his position as a royal favourite.

Until forty years ago, Sennefer was known only from his statue in the Cairo Museum, and his exquisite tomb. But he has also come to light in a letter written on papyrus (now in Berlin) to an estate manager. Letters from this period are rare, and those that drop their official mask and reveal an individual are even rarer. Hectoring of the sort shown here is characteristic of Egyptian officials, and can even be affectionate. It is the passionate sincerity of the letter that really counts.

A note on the reading

The mayor of the southern capital Sennefer speaks to the tenant-farmer Baki son of Kyson to the following effect. This letter is brought to you to tell you that I am coming to see you when we moor at Hu in three days' time. Do not let me find fault with you in your duties. Do not fail to have things in perfect order. Also, pick for me many plants, lotuses and flowers, and others worth offering. Further, you are to cut 5000 boards and 200 timbers; then the boat that will bring me can carry them, since you have not cut any wood this year - understood? On no account be slack. If you are not able to cut them you should approach Woser, the mayor of Hu. Pay attention: the herdsman of Cusae and the cowherds who are under my authority, fetch them for yourself in order to cut the wood, along with the workmen who are with you. Also, you are to order the herdsmen to prepare milk in new jars in anticipation of my arrival - understood? You are not to slack, because I know that you are a wiwi, and fond of eating in bed.