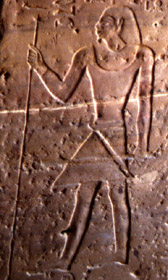 Image taken from the tomb of Harkhuf, Aswan
Back to index

The life of Harkhuf is known entirely from the inscriptions in his tomb at Aswan, near the First Cataract of the Nile. Harkhuf ended his days as an honoured courtier, and his importance lies in his early adventures, and the way that he attracted the attention of the royal court.

Old Kingdom Egypt took a keen interest in the affairs of its southern neighbour, Nubia. The region was rich in gold, controlled trade with Africa, and was vast and unexplored. The task of Harkhuf's family was to explore it.

Harkhuf records how, as a youth, he accompanied his father into the upper country, at the request of King Merenre (c.2287-2278 BC). He travelled a considerable distance to a land called Iyam, which probably corresponds to the fertile plain that opens out south of the area of modern Khartoum, where the Blue Nile joins the White.

On his second expedition Harkhuf travelled alone, bringing back with him exotic gifts, which must have enhanced his status at court. On his third journey, Harkhuf was entrusted to track down the ruler of Iyam, who had gone on a campaign against the southern Libyans, and persuade him to abandon his ambitions. The pharaohs were reluctant to see the expansion of Iyam, which could threaten Egyptian control over the north of Nubia.

This may have been the high point of Harkhuf's career, but pride of place in his tomb is given to a letter he received from the new king, a boy known to history as Pepi II. Among the treasures brought back from Africa was a pygmy who could do exotic dances. Harkhuf knew this would delight the young ruler.

The little king's letter about this gift would have been written on papyrus, and perished millennia ago. But the text was transcribed and carved on the wall of the tomb, and is there to this day. It is a combination of official jargon, shot through with schoolboy enthusiasm, and it is clear why Harkhuf chose to take it with him into eternity. It is one of the most vivid letters to survive from the ancient world.

The matter of your letter has been noted, which you sent to the king at the Palace, to the effect that you have returned safely from Iyam together with the army that was with you.

You said in this letter of yours that you have brought all sorts of great and beautiful gifts, which Hathor, the mistress of Nubia, has granted to the spirit of my throne name, who lives for ever.

You said in this letter of yours that you have brought a pygmy, of divine dances, from the land of the horizon-dwellers, like the one that the seal-bearer Bawerdjed brought from Punt in the time of king Isesi, and you said the like of him has never been brought back by any one who did Iyam in the past.

Come north to the Palace at once ! Drop everything - hurry and bring that pygmy you have brought, alive, happy and well, for the divine dances, to gladden the heart, to delight the heart of the king who lives for ever ! When he goes down with you the boat, get trusty men to stand around him on the gangplank - don't let him fall in the water ! When he goes to bed at night, get trusty men to lie all round him in his hammock. Inspect ten times a night ! My Majesty longs to see this pygmy more than all the treasures of Sinai and Punt ! If you arrive at the Palace and that pygmy is with you, alive, happy and well, my Majesty will do greater things for you than was done for the seal-bearer Bawerdjed in the time of Isesi, because my Majesty so wishes to see that pygmy. Orders have been given to the chiefs of the New Towns and the overseer of priests to furnish supplies from every depot and every temple under their charge. No exception has been made for this.