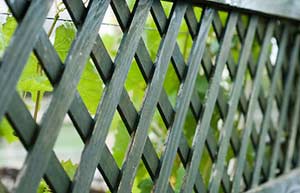 Wood is potentially one of the most environmentally friendly materials we can use in the garden: it's a natural material that can be sustainably grown, it takes less energy than other hard materials to turn into products such as planks, panels and furniture, and it absorbs harmful carbon dioxide as it grows. But there are issues around the huge demand for it.

The effects of tree logging

The shortage of fence panels early in 2007, when many householders needed to replace ones felled by the storms, was put down to European producers exporting more to China and Dubai - and in parts of the world trees are being felled in a way that damages the forests, the people who live in them, and the wider environment.

Hardwood garden furniture and decking poses a particular problem if it's from West Africa because it was probably felled in a forest in the Congo Basin, home to more than half of Africa's animal species.

According to conservation groups such as Greenpeace, illegal logging is rampant in the region and corruption is widespread. This means that tranches of natural forest are being destroyed. It also means that local communities are losing many of their natural resources, such as food, fuel and medicines, and aren't being compensated.

Greenpeace has reported how villagers in western Democratic Republic of Congo were encouraged to sign access contracts with an international logging company, and in return received bags of salt, sugar, beer and soap. Not a penny of the area taxes raised in the previous three years, agreed with the World Bank and earmarked for local communities to help with such amenities as hospitals and schools, has reached the local people.

Other hardwoods such as teak and yellow balau are used to make garden furniture, and may also be sourced illegally.

It's not just wood from tropical rainforests we should be concerned about, say the conservation watchdogs. Illegal logging is rife in Russia, for example, where the larch for many of our timber fences is sourced. And even timber in plantations, which use fast-growing species and so are a more sustainable alternative, needs to be responsibly managed.

Many environmental groups support the FSC (Forest Stewardship Council) certification scheme, which provides a chain of custody number for every labelled product. This tracks the timber through all stages of processing to ensure that it's sustainably sourced and managed. But foresters in the UK point out that the scheme disadvantages small producers as it's too bureaucratic and costly for them to comply with. And members of FSC-Watch are concerned that there are an increasing number of certifications that have not been rigorously audited and so are undermining the scheme.

Andy Tait, Senior adivisor, Biodiversity, Greenpeace. "Illegally logged wood is still being used to provide wood for our gardens - not just wood from tropical forests but in some cases also from boreal and temperate forests. It's sometimes very hard for the consumer to know even what wood a piece of furniture has been made from, let alone where it comes from. So, the most important thing you can do, is to check that wood is FSC-labelled (Forest Stewardship Council). FSC is a demanding system of certification, that has high environmental and social standards, and that's why we and other environmental groups support it. If it's not FSC, you should immediately be wary of it and ask questions about where it comes from, and whether it has any creditation. Using recycled and reclaimed wood is also a good idea when possible."

Steve Young, Director, Timber Decking Association. "Up until recently, 90 per cent of the decking in the UK was made from pressure-treated softwoods, mostly from sustainable forests in Europe. Now architects and consumers are choosing to use more hardwoods - up to 25 per cent - for decking and other garden structures such as balustrades, arbours and planters. Hardwood is denser and hard wearing and has beautiful colour variations. There's a plentiful supply of hardwoods such as oak from Europe, but with tropical species we're very concerned to promote the hardwood products that only come from legal and well-managed forests. Full certification to a recognised standard such as FSC and PEFC (Programme for Endorsement of Forest Certification) can be very costly and demanding so in developing countries there are various independent verifications that help foresters work towards full certification. It's important we support these schemes."

What you can do