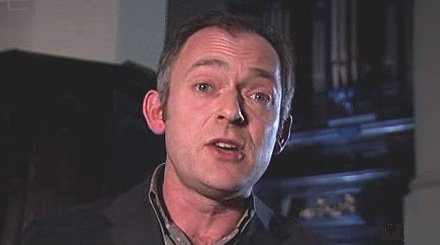 HAYDN - AN AUSTRIAN IN BRITAIN

Charles Hazlewood outlines the plans for Haydn broadcasts during the Composers of the Year celebrations. Charles was filmed specially for the website in the Church of St Martin-within-Ludgate in the City of London. There has been a church on the site since 1174; the current building was completed in 1680 after the previous church was gutted in the Great Fire of London (1666).

Most people know Joseph Haydn as Austria’s great master of Classical style, and the man who taught Mozart and Beethoven. As the composer of some of the world’s best-loved symphonies, oratorios, concertos and chamber music, his fame was truly international. Haydn arrived in England on New Year’s Day, 1791 – it was the first time ever that he’d been allowed to leave his noble masters at Esterhazy, near the Hungarian border, and it was Britain that he chose to make his destination. Right from the start, he enjoyed a level of fame and adulation here that was unprecedented for a composer of ‘classical music’ – his presence here marked a turning point not only in musical culture, but also in his music.

Visit the Haydn picture gallery for a fascinating visual guide to Haydn's life and times.

Did you know that amateur phrenologists exhumed Haydn's body shortly after he died and removed his head? Read more ...

Beginning with EBU Haydn Day on May 31 and running through June and July, a special season of programming on Radio 3 includes performances, documentaries, discussions and drama which celebrate Haydn the composer - the father of the symphony and the string quartet - and Haydn the man, a popular individual whose appeal has been unfairly diminished due, in part, to his genial character ...

■ EBU HAYDN DAY
■ Complete Symphonies in BBC Radio 3’s Classical Collection
■ The Piano Sonatas in BBC Radio 3’s Breakfast
■ The great Quartets in Afternoon on 3
■ At the Proms – July 18
■ Alfred Brendel, Roger Norrington, Sir Robert Winston, Nikolaus Harnoncourt and Peter Cropper are among those talking about Haydn
■ A week of concerts on Performance on 3 including a rare performance of the oratorio The Return of Tobias.

Composers of the Year offers you the chance to receive text alerts giving details of forthcoming broadcasts and events. It's simple to sign up and once you've done so, your text alerts will be free. Click on the link below for full details.

Become a fan of Haydn

Composer of the Week: Haydn
Donald Macleod explores the life and music of Joseph Haydn, the bicentenary of whose death is marked in 2009. This episode is an edited compilation of the entire week's programmes, broadcast earlier this year, and is only available within the UK.

More Haydn links on the BBC

More Haydn links on the Web

THE BIRTH OF BRITISH MUSIC

The Composers of the Year feature in a BBC 2 series, in May 2009 - Charles Hazlewood introduces the programmes.

More about the series

Haydn's string quartets regularly feature in Afternoon on 3. The cycle of symphonies can be heard in Classical Collection

This is just to say that the Composers of the Year blogs are moving ......