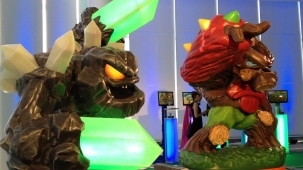 If you've not come across it already Skylanders: Spyro's Adventure is a videogame that launched last year. In it players explore a fantasy cartoon world to earn points and unlock new levels. It's unusual because it uses toy action figures to access characters in the game.

The game is designed for children 7yrs and older. It comes with a set of three toy figures that are placed on a Portal peripheral (a small grey box connected to the videogame console) to access the related character in the game. Progress made in the game is then automatically recorded on the toy with no wires or pressing of buttons.

Children can take the toy figure to a friend's house and play the game on their console to access the progress they made with their character. This works across different types of videogame console and greatly simplifies switching characters in the game and saving progress.

However, some parents have been critical of the videos that play in the game to advertise the other toy figures in the range. Skylanders supports 30 of these characters that are purchased separately for £6.99 or in packs of three for £19.99.

It is this method of restricting access to characters in the game that is both revolutionary and controversial. Videogames have traditionally granted new characters and levels as a reward for good play and in-game achievements. Skylanders: Spyro's Adventure is different because it only grants access to new characters once a player has purchased the related toy. To access everything in the game would require you to purchase every character at a cost of hundreds of pounds.

Frustrations have been exasperated by the popularity of the toy figures that has made them hard to find in stores or online. This has also led to the most desirable figures being sold second hand for many times their recommended retail value.
This week in New York, publisher Activision announced the next game in the series: Skylanders Giants. This adds larger toy figures to the range as well characters that light up when placed on the Portal peripheral.

Skylanders Giants will be available at the end of the year and will support all the toy figures (and portal) from the first game while introducing various new characters and special edition models. This leads to further questions about how the new game will be priced and packaged, and for fans of the series whether availability issues will be resolved.

For parents the key to this problem is in understanding what you do and don't need to purchase to play the game. While there is an inescapable desire from children to collect the toy figures they can actually play through to the end of the game using just the three figures that come with the starter pack (£49.99).

This offers an adventure that will take most players a good 20 hours. The experience is extended with a range of battle modes and challenges where players can pit their starter pack characters against each other.

In terms of value for money, younger players are best placed to benefit. They can find value in both the videogame and the toys themselves. The Skylanders starter pack is priced a little higher than other games, but does include three starter figures and the Portal peripheral. The action figures' £6.99 price is on a par with other toy characters of a similar style and quality.

While we are used to seeing adverts and product placement in other entertainment aimed at children, such a hard sell in a videogame can be a little surprising. Parents should play the game with their children to gain a full picture of how commercial (and enjoyable) the experience is.

News and views from the You & Yours production team and reporters.

You can stay up to date with You & Yours via these feeds.