The New Director's scheme is run by BBC Writersroom with financial and skills support from Creative Skillset's High End levy and Directors UK. In its first year the scheme placed 4 directors on EastEnders, 2 on Holby City, 2 on Casualty and 4 on Doctors. The scheme is now in its second year with placements beginning soon on Doctors, Casualty, Holby City and River City. Afia Nkrumah was successful in gaining a placement on EastEnders and explains what happened next...

I fell into directing by accident. I was a member of the Royal Court Young People’s theatre. Two of my friends there and I had written a play, when a space came up in the theatre upstairs one summer. The other two didn’t want to direct it, so I said I would have a go. That experience, made me want to direct for the rest of my life. I love the all-consuming nature of directing and I have a pathological love of actors. Directing is satisfying and challenging in equal measure, and you can do it for a thousand years and always discover something new to learn. 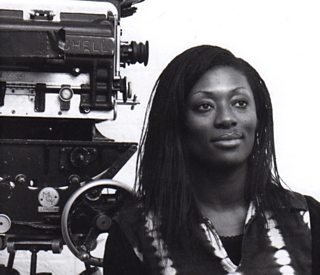 I applied to assist the artistic director of The Bush Theatre, I didn’t get the job, but they asked me to be a script reader. I read scripts for the Bush and other theatre and TV companies for years. Script reading is a great skill for directing and a good way of earning money between projects. I directed several new plays on the fringe and in regional theatres, l assisted in theatres like the RNT, The Young Vic and received the Jerwood Young Director’s Award. I then got a scholarship to do an MA at The London Film School , after which I worked as an AP in documentaries for BBC Current Affairs. I also produced short films for friends and wrote and directed my own short films on the side. My last short film Shadow Man was supported by Film London’s London Calling Plus scheme. 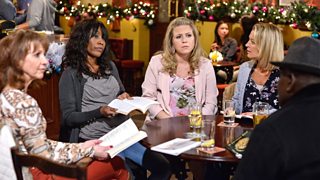 A still from Afia's first episode of EastEnders, EP5394 broadcast on 1st December 2016.

This is the film I sent as an example of my work, along with my pitch for EastEnders for the BBC New TV Director’s scheme, which was advertised through BBC Writersroom. I applied for EastEnders because I watch the show and had been a fan since childhood. After the first interview, we were set a test to prepare for the second interview. We were given a second draft script, of an episode which was going out the evening of the interview. We were asked what script notes we would give (so all those years of script reading came in handy!) We also had to talk about how we would approach directing that Episode.

The scheme has been a brilliant experience and really well structured, with a mixture of classroom learning and practical experience. There is time to really absorb the vast amount of new information and new ways of working on a big iconic show like EastEnders. The first part of the scheme was in a classroom situation with a directing tutor learning the principles of multi-camera directing and learning how EastEnders works. We then had the opportunity to shadow the whole directing process, from pre-production planning meetings to spending time shadowing as many directors as we wanted on set. It was really useful because you can gauge what sort of a director you are or want to be by watching other directors at work. 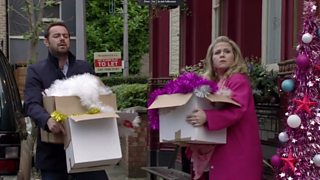 The final part of our training involved two weeks actually directing some past scripts, with a full crew and a whole new company of actors and and post production staff. I was terrified the first time I set foot on an EastEnders set! The crew was much larger than I had worked with before, the show is so iconic, I didn’t want to mess up.

There is a lot of support at EastEnders. For example we had been given a tour of the studios but I kept getting lost. A PM (Production Manager) took the time to take me round again explaining how the studios were laid out. EastEnders took great care in finding each of us the right directing mentor who was an established TV director to support us through our first episode as directors. Together with the two weeks on the floor directing and editing, we all felt really prepared when it was time to direct our first episode. I had a blast with my mentor , who gave me a lot of confidence as well as learning from her experience and watching her work. It was a real thrill to see my name at the end of the credits after my first episode was transmitted. 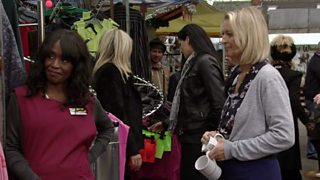 You need to be pretty organised and focussed when directing EastEnders, because you have a lot of information to absorb and process very quickly before you can begin preparing the four scripts that make up a shooting block. You need to stay on top of your reading, so that you can track the story of each of the characters coming into your block. You need to know the sets really well and you need to communicate clearly and succinctly with all the HODS (Heads of Department) that are helping you to realise your vision and the stories within the block.

There is a lot of experience for us to tap into as new directors and sometimes when you are up against it, a timely suggestion from your Camera Supervisor, Art Director or 1st AD can save you time and make your work better. 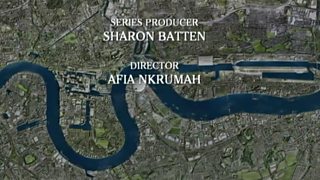 Afia's name on the credits for her first episode of EastEnders

The one thing I would say to anyone applying to the scheme is know the show you are applying for. Watch it, get information about the show from the internet, speak to die-hard fans of the show, and see why they love it before you even apply.

Since Afia directed her first episode of EastEnders as part of the New Director's Scheme (broadcast on 1st December 2016) she has subsequently been given her own block of episodes which she shot last month and which are broadcast next month.