Developing Father Brown for BBC One 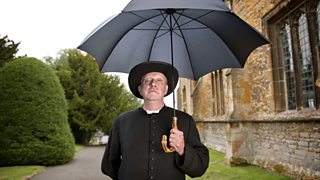 TG: First, as is apt, a confession: before working on Father Brown, I’d never read a single word of GK Chesterton. Or written a murder-mystery. Or a period piece. Or developed a new TV series. I’d written numerous episodes of Holby City, as well as Casualty, Eastenders, and Doctors, but this was new territory. I was well outside my comfort zone – but I think that’s a good place for a writer to be.

RF: Well, I’d done nearly all those things, but I’m not sure it made it any easier! It’s such a major undertaking, adapting a well-loved character and set of stories that work brilliantly as they are – but that need complete revisioning to shine in a TV drama format, especially for daytime. Creating a precinct and a gang of supporting characters were key, both financially and to give our audience a familiar welcome each ep – but they had to work with Chesterton’s tone and themes. And there are an awful lot of Chesterton fans out there (my mum included!) who would be rightly furious if we got it wrong.

TG: Rachel and I were approached independently about developing Father Brown. Our paths had crossed, briefly, in 2009, when I was attending a Writersroom residential course on continuing drama, and Rachel was a guest speaker, having come through the BBC Writers’ Academy  (unbeknownst to me at the time, later that year I too would be ensconced in the writing boot camp that was the Writers’ Academy).

RF: In fact I had also been on a Writersroom course, aimed at developing original drama, and we’ve both been heavily involved with BBC Continuing Drama since leaving the Academy. I can’t express how amazing an experience the Academy was – it gets a bit of stick in writing circles, but it gives you such a valuable lexicon to use when talking about story, and a really robust understanding of how stories have worked for generations, in all formats (not just soap!). I certainly drew on it for Father Brown.

TG: We both wrote treatments for “Father Brown – The TV Series”, creating the precinct and a cast of supporting characters. Quicker than you can say “vespers”, we were off to the Cotswolds to scout locations. Over a pub lunch with John Yorke (exec), Will Trotter (exec), Ceri Meyrick (producer), Sam Hill (Series Producer), and Neil Irvine (script editor) we decided on the period and nailed down our supporting characters.

RF: We settled on a gang of six regular characters, including Father Brown, trying to introduce different elements of ‘50s society and an even age/sex mix. Inspector Valentine was a Chesterton invention, though he’s written out of the stories early on, and Sid, our ducking-and-diving chauffeur, was loosely inspired by Chesterton’s master-criminal-turned-crimefighter Flambeau – in fact, in early treatments, his name was ‘Flam’. Renaming him ‘Sid’ was a nod to the Sid James character in the Alec Guinness film – never say we’re not Catholic in the breadth of our source material! Susie brings a touch of will-they-won’t-they romance, and introduces the world of Polish immigrants in the 50s – a nice parallel with today – and Lady Felicia adds glamour, and gives Father Brown an ‘in’ to all sorts of interesting worlds. Mrs. McCarthy is the parish secretary – Catholics out there will know how important that role is in any parish…

Lady Felicia reveals that Annie Marie had a drinking problem.

TG: Rachel and I had two weeks to amalgamate our treatments, which became the “bible” for the show, containing biogs for all the characters, and guidelines on the format and tone of the series. We then had about a month to write our first drafts – Rachel chose “The Flying Stars”, whilst I went with “The Hammer of God”.

RF: There’s a blog out there somewhere where someone, when our series was first announced, decided to review the five stories he considered most likely to be adapted… let’s put it this way, “The Flying Stars” and “The Hammer of God” did not feature! It probably tells you a lot about us as writers that we chose those two. I think Tahsin was drawn to the religious conflict in “Hammer” (no spoilers, I’ll say no more), whereas I was intrigued by the interaction between appearance and reality in “Stars” – it even has a play-within-the-play, like classic Revenge Tragedy!

TG: They’re challenging stories to adapt. Father Brown is described by Chesterton as being almost invisible, someone who fades into the background. Not exactly jumping off the screen then! Whilst not losing this aspect of his character – the quiet observer of things – we re-imagined him as somewhat more playful and outgoing, as well as tolerant and forward-thinking. In addition, for the stories to work for television, they needed more suspects, more twists and turns – in short, more story!

RF: I think both episodes will nonetheless be instantly recognisable to fans of the stories – we’ve created new twists, conflicts and motives, but the heart of the mysteries is still beating loudly inside! Of the series of ten, five are adaptations, five are new stories – it’ll be interesting seeing whether people unfamiliar with the source material will be able to tell which is which…

TG: Now, a couple of days away from transmission, it’s thrilling – and a huge relief – to see the show getting such great previews in the listings magazines and newspapers. Mark Williams brings so much charm, compassion, intellect, and humour to the character. Sorcha Cusack, as Mrs McCarthy, is a force of nature. Hugo Speer, as Inspector Valentine, brings a working class integrity, both a foil and ally to Father Brown. The rest of the cast – Alex Price, Nancy Carroll and Kasia Koleczek – inhabit their roles. Debbie Wiseman’s music is luscious. Oh, and the show looks gorgeous – not a hint of its daytime budget. Now, let’s just hope the audience gives the show its blessing.

Tahsin Guner & Rachel Flowerday are co-creators and writers on Father Brown - the brand new BBC One daytime drama based on the stories by GK Chesterton, about a crime-solving Roman Catholic priest.

Father Brown starts on BBC One today at 14:10 and you can watch on BBC iPlayer