What’s funny? An update from our Comedy Script Room.

Editor's note: Our Script Room for unsolicited scripts is open twice a year, once for Comedy and once for Drama.  The most recent Comedy Script Room closed last month.  Since then our team of freelance Script Readers have been busy ....

Dave sits typing at his computer in the dusty, corporate grey of an open-plan office staring into space. He wishes he was writing a script, but instead he’s doing something monotonous and soul destroying in Excel. For a treat he takes a sip of coffee, realising too late that it’s cold, has been there since yesterday and is covered in skin. An overhead fan whirs, which is strange, as offices haven’t had overhead fans since 1988. He bangs his head on his desk in despair. “This,” he thinks, “would make a brilliant sitcom.”

Meanwhile in the BBC Writersroom, a script reader is on page seven of a comedy about someone called Dave banging his head on a desk and is wondering how long it will take for him to knock himself out. She is feeling sad that there are so many Daves out there, having such a miserable time in so many unfulfilling jobs. So sad, she hasn’t laughed once.

Young guys in offices, young guys in flatshares, young guys playing football, older guys playing guitars, older guys moving back in with their parents, guys of all ages having a chat or crisis in the pub: these are some of the themes in the 2111 scripts sent in to this year’s BBC Writersroom comedy script room ‘sift’. Of the scripts I ‘sifted’ (i.e. read the first 10-20 pages of) some were entertaining, a handful were funny, two made me laugh aloud, a few made me cringe, and lots had potential even if this wasn’t enough for them to become part of the small number that went to get a full read. 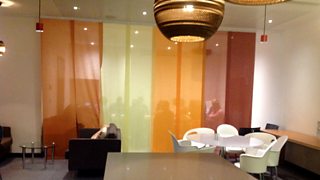 Behind the curtain: Script Readers for BBC Writersroom

The standard of the scripts was higher than in previous comedy sifts and, as is often the case, especially with comedy, fewer women sent us their work than men (one in four). Within the scripts we received there were many female characters, but a fair proportion were doing things like “clinging onto their fading good looks”, being “beautiful but bitchy” or simply “unattractive” (how dare they!) with the same kind of dead-eyed weariness as when I wrote about them two years ago.

However, there were also lots of cool and imaginative scripts, and less imaginative but polished scripts, and weird but interesting scripts that I knew the person sitting across the table from me would hate, but I put through anyway because, hey, I work for the BBC and someone once told me that means “being brave”. Comedy is, of course, subjective – and so is script reading, as I’ve mentioned before. But when it comes to what script readers and producers are looking for there are lots of things they agree on, at least in theory.

“Irresistible original comedy characters” are something that would make Head of BBC Radio Comedy Julia Mckenzie commission a script. She also feels dialogue should be properly “funny, and not just banter or mildly witty. It needs to make me laugh or at the very least crack a smile.” Unsurprisingly, believable characters and a strong sense of humour are things Executive Producer of BBC Comedy Richard Webb likes to find too. “This may sound glib, but you’d be amazed how many scripts don’t have any jokes in them. Comedy, famously, is meant to be funny.” 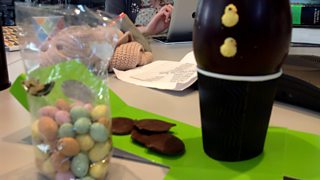 Sustenance for the Script Reading team!

I ask Richard, what would be the one thing he would like to make before he dies? “I’d like to make a lot of things as I’m not planning on dying for a bit,” he replies, “but a big, fat mainstream hit that people aren’t snobbish about would be a good start.” Julia continues: “Writing mainstream funny stuff that has heart and some sense of underlying substance is the most difficult thing to get right, but if you can it’s magical.”

What would Julia say to people who feel that BBC Comedy is too safe? “’Is that because your sitcom about nymphomaniac zombies who share a flat has been turned down?’” she replies. “People say that Radio 4 comedy is safe, but a great deal of it would make you spit out your Werther’s Original.” Richard’s response to such criticism is similar: “I’d say you haven’t been watching it. There’s nothing safe about Inside No. 9, Nurse, Stewart Lee or W1A.”

One of the problems new writers sometimes face in consciously trying to write “a mainstream hit” is that their scripts can end up feeling cold and cynical. We often read sitcoms about flatshares that are similar to Friends, or domestic comedies inspired by shows like My Family, or stuff set in shops that’s a bit like Black Books. Sometimes they’re pretty polished, but also lacklustre – like the writer has approached them the same way I might approach assembling an Ikea chair. The end product might look like it’s supposed to, but there’s an allen key sticking out of the side. 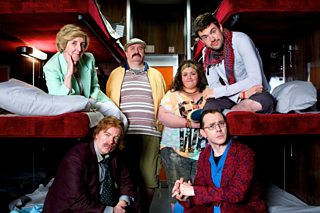 Inside No. 9 written by and starring Steve Pemberton and Reece Shearsmith

Deliberately trying to create original or ‘unsafe’ comedy isn’t easy either. The kind of boundary-pushing stuff some writers might envision for late night on BBC2, or beyond (“my work is pretty edgy”), often ends up being shocking simply for the sake of it. In it, male characters tend to behave in unpredictable and extreme ways: for instance, sexually abusing a “beautiful but bitchy” boss, shouting racist abuse at anyone who isn’t white, or defecating loudly on a toilet floor.

“Yes, but is it funny?” BBC Development Producer Simon Nelson asked, after one of my colleagues had read a sitcom featuring one of the above. “No,” she replied, “It’s just offensive.” And yet, offensive comedy can be really effective, particularly if there’s a point behind it. And even if there isn’t, sometimes it makes us laugh anyway, although as we might then feel obliged to point out “not necessarily in a good way”. But still, we’re laughing.

I talk to stand-up comedian Stephen Carlin about the difference between confrontational and mainstream comedy. “There’s a tendency [for comedy producers and writers] to try and give people what they want,” he says. “But if you set out to be either risky or safe that’s possibly the wrong thing to do. It’s better to concentrate on just writing something good.”

If you want to make me laugh, it’s actually quite easy: I realised a while ago that every comedy character I love is pompous, delusional and sees themselves completely differently to the way they actually are. On the radio I like Clare in the Community; on TV I like Siobhan Sharpe in W1A, but there are also lots of others. You might like different things – for instance, characters such as Dave, the ‘little man’ struggling against an unfair and oppressive work/ life balance. Perhaps you’re wondering what happened to him. Was he given a ‘no’ verdict at ten pages? Did the BBC script reader pass him to another BBC script reader for a full read? Did she secretly place him under a cake on Richard or Julia’s desk? 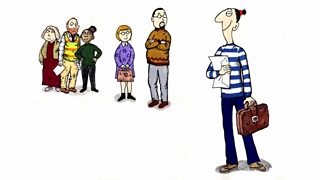 I wish I could tell you, but I’m afraid there are lots of Daves in lots of scripts and they have a tendency to blur into one giant blob of melancholy, despair and biscuit crumbs. Most don’t get past 10 or 20 pages in the BBC Writersroom comedy sifts – but, then again, neither do most characters. However, there’s no reason why Dave couldn’t be an interesting, funny and, indeed, topical figure if he found the right writer. In the meantime, I hope he can get a well-paid, satisfying day job he enjoys and have a proper cup of hot, freshly made coffee. Everyone deserves that.

Q&A with the writer of BBC Three's 'Tatau'