The Comedy Room Day Two: Generating Ideas, Writing to a Brief and Pitching

Hi there! My name is Amy, I’m a comedian and writer and I have been tasked with telling you all about our second session with the BBC Comedy Room. Firstly, what is this…’Comedy Room?’ Is it like an escape room, but you have to desperately try and find your way out whilst an awkward clown distracts you with some terrible jokes? Nope, that’s just one of my stand-up gigs. Wahey! Just a little joke for you there, now we can get down to business.

The Comedy Room is a group of writers who were chosen after sending in scripts to the BBC via their annual submission process. We meet monthly at the BBC in very large room which we’ve been repeatedly told is bomb proof (presumably because our collective talent is so explosive and a threat to public safety*), where we take part in workshops run by the best comedy writers and producers in the business.** 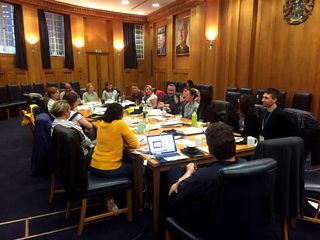 Our second meet-up started with us revealing the fruits of our homework. (Yes, we have homework! *feels young again*) We were asked to come up with a pitch to present to the rest of the group. I had never pitched anything before. In fact, the only time I’d ever even seen anyone do a pitch was on The Apprentice, which usually involves a trembling estate agent pitching an inedible microwave meal to three people from Asda. ‘I can do better than that!’ I thought, and my mind was instantly put at rest.

Turns out, however, that not all pitches are exactly like the ones on The Apprentice and we actually had to come up with a new idea for a comedy show. I really should have seen that coming. I think we were all slightly intimidated by the task at first but the pitching session was very informal and it was fascinating to hear the range of ideas that everyone else came up with. I’m often one for letting an idea stew in my head for months and months before I tell anyone about it (not a great technique for writing topical comedy) so it actually felt quite liberating to say my half-baked concept out loud – and a useful exercise as well, seeing as writing comedy often involves throwing ideas out there to other writers before you’ve had much time to think about them.

Watch an interview with comedy writer and performer Gemma Arrowsmith

Next we were joined by actor and comedy writer Gemma Arrowsmith who shared with us the knowledge she’s gathered from writing and script-editing for shows such as Tracey Breaks the News, Class Dismissed, Newsjack, The News Quiz and The Now Show. This section of the day was all about writing for a brief. As it’s all very well being able to write a sitcom script where every character is a thinly-disguised version of myself, but what if I’m eventually required to - heaven forbid – write something that’s not about me?

We were set two tasks – firstly, we had to come up with concepts for sketches based on the original brief for Tracey Ullman’s Show. This was all about generating ideas that were obviously hilarious and ideally low-budget (no paragliding over Niagara Falls or fighting a duel on the back of an elephant), but were also suitable for Tracey. I think having a particular actor at the centre of a brief that was otherwise quite broad helped to focus our suggestions, as we had to keep in mind the kinds of characters that Tracey could play, or the celebrities she could perhaps do an impression of. Secondly, we had to think of sketch ideas for Horrible Histories. We’d been given a bumper pack of information to read for our homework (*swishes pigtails*) which consisted of a LOT of facts and research that the writers of the show use to base their sketches on. It definitely felt like quite a challenge as not only did they have to be funny, they also had to be educational and on the level of the average 9 year old (that bit wasn’t too hard for me.) 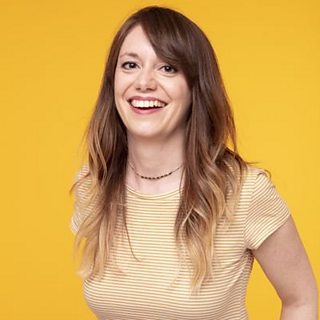 After lunch we had a session with BBC Comedy Room Executive Simon Nelson, who is kind of like our Head Teacher, as in he sets our homework and makes us sing hymns at the start of the day. (I’m joking of course! Amanda sets our homework.) He spoke to us about comedy archetypes and we learnt that the majority of characters fall into one of seven categories; The Loveable Loser, The Neurotic, The One Who’s On Their Own Planet, The Sane/Logical One, The Bitch/Bastard, The Dumb One and The Horny One. Coincidentally, this was also the catchy name of the seven-piece girl band I was briefly in during year ten.

To round off the day, we had a visit from TV and radio comedy producer David Tyler, who’s worked on shows such as Cabin Pressure, Armando Iannucci’s Charm Offensive, Coogan’s Run, Dinnerladies, The House of Milton Jones and countless others! With David we looked at the evolution of scripts from the early draft stage to broadcast. We focussed on two radio shows – the Penguin Diplomacy episode of John Finnemore’s Double Acts, and an episode from the first series of Shush! – a comedy set in a library written by Rebecca Front and Morwenna Banks. Shush! is recorded live in a studio and Double Acts is not, so both shows are quite different in pace and tone, due to the former having to get that instant reaction from the audience. The comedy in Shush! arose from fairly high-stakes action in some instances (for example, one of the characters nearly runs over a herd of cows and a brass band with an out-of-control ice-cream van.) The dialogue needs to be versatile - we looked at how the opening lines not only make the audience laugh but also drive the plot whilst introducing the main characters and their personality traits. In Double Acts the narrative gradually builds through the developing relationship between the two characters, the humour often originating from the misunderstandings between them, repetition and strategically placed pauses. It was very eye-opening to zoom in on the little details in both scripts and explore how they pull the story together as whole.

Well, we’ve now come to the end of my second-session summary. If you stuck around until the end then I appreciate it, you’ve stayed with me longer than anyone who comes to see my stand-up. Wahey! Just a little a joke to end with there. I’m off to start my next lot of homework now (*writes ‘I love Robbie Williams’ all over pencil case*).

*I’ve since found out that it’s to protect us from the outside. I’m not convinced though.
** Who were also free at the time.

Submissions of Comedy scripts will open around mid to late March. Keep an eye on our Opportunities page and social media for details

Find out more about Comedy Room

The Trial of Christine Keeler