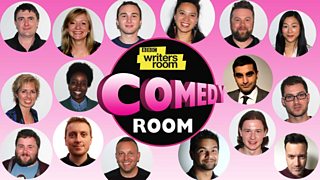 "We are absolutely delighted to introduce our Comedy Room writers, after months of script reading and interviews.

It’s a very mixed group – most have come through our Script Room submissions, and talent searches, a couple via stand-up shows. For some writers it is their first script, some have been writing for longer –and a few are successful in other areas but wanting to develop in narrative Comedy.

The eagle-eyed amongst you will spot a familiar name – Sally Stott! Sally is actually one of our script readers, and blogs for us from time to time. But, before you feel cheated, I have to tell you that she submitted a script to BBC Writersroom under a false name. None of us were aware – and she made sure she never reported on her own script, and never took part in any discussions about it. It was only when, as one of the final twenty, we invited “Alex Taylor-Smith” to come in and meet us, that she had to come clean! So we interviewed her, and treated her like anyone else.

We are really looking forward to working with the 15 (including two writing pairs), and wish them every success for the future.

And, to those who didn’t make it – there will be another opportunity next year!" 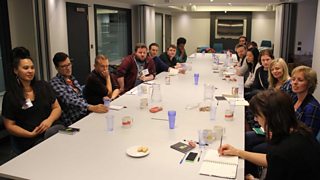 What is BBC Writersroom's Comedy Room?

Comedy Room 2015 is a development pool of 15 up and coming writers. It launched on 2nd October 2015. These writers have been selected from BBC Writersroom's open talent searches, alongside input from BBC Comedy (TV & Radio). They will receive targeted training and development for six months, including workshops, masterclasses and networking events.

The aim of the scheme is to encourage and develop the best in new comedy writing and to help these writers to build strong connections within BBC Comedy.

The selected writers are:

In six months’ time we will run Drama Room, for Drama writers, in the same way, partnering with BBC Drama.

Read the Press Release on the BBC Media Centre

'The Last Kingdom' - an interview with screenwriter Stephen Butchard

Writing 'River' for BBC One