Viral Success! But what does it mean?

Graham Hughes took part in our Fast and Funny Scottish comedy writer's scheme back in 2016. He explains how his final sketch from the scheme has gained over 1 million views in the last few days... 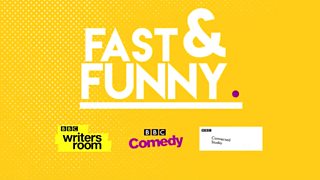 Ah, the halcyon days of late-2015. Back then we were hearing grim news about beloved celebrities on a near-daily basis, and a piece of ill-advised pop-culture media had threatened the outbreak of World War III. How times have changed.

At that time, I had also just submitted an application to a new BBC Writersroom and BBC Scotland scheme, Fast & Funny, which was looking for people to create short, comedy content for an online audience. They were specifically looking for people that had already dipped a toe in that field. So I submitted a few sketches, gifs and vines I’d made over the years, a lot of which involved my dog, and it was enough to get me a place on the scheme. My dog got rejected, though. She’s still bitter.

There were twelve participants, and over six months we were treated to various masterclasses with other writers and media professionals, and were given monthly challenges to make comedy content. These included things like making a vine, or making a Valentine’s Day-inspired video. After each challenge, the scheme-runners would pick a couple of their favourites and these were shown on BBC Scotland’s various social media channels. For the final challenge, we were allotted time with a professional crew, and given access to shoot on the River City sets in Dumbarton.

All of the sketches were published on the BBC website and YouTube, and from what I’ve seen, most got between a couple of hundred views and about 10,000. The sketch I wrote was sitting at around 400 views, about 200 of which were mine. (I think the rest were my Mum). A couple of the sketches were put on Facebook and they performed better there, getting into the tens of thousands, but they hadn’t exactly set the world on fire. Which is fine, because the world doesn’t really need any help in that department.

Fast-forward to last week. Now, I’m an avid Imgur user. I like to browse and post OC (original content) to the site. Getting to the front page is the Golden Goose; it’s notoriously difficult so getting on it gives a pretty good high! I’d not posted in a while, but after my dog went viral last week for wearing a hat and cardigan (honestly) I got that buzz again, and I wanted to keep it going. Since I had no new ideas (the dog has all the best ones), I started ransacking my back-catalogue, trying to figure out what old piece of content I could recycle as a gif. And that’s when I remembered the Fast & Funny sketch.

After ripping the sketch off of YouTube and plastering some subtitles on it, I put it onto Imgur. Within about 5 hours it had gotten to the front page. Wanting to plug some of my other work while I had a captive audience, I made a botched front page-edit, and somehow managed to split the post into two. Shortly after that, some gumptious user spied the new post and put it on Reddit, which simultaneously diluted and exponentially increased the views. 3 days later 9gag got a hold of it and it ended up on their front page too.

It’s interesting that that the original sketch had little success on YouTube, but people have really connected to it as a gif. This is maybe just the right audience… which is ironic because the sketch is about YouTube. Who knows? It’s also surprising that it's taken off now, as the idea felt current to me back in 2016, and now, two years on, people are engaging with it. I thought it would be stale, but maybe the idea just hadn’t taken root yet. Again, who knows? Maybe it’s that age-old cliche that nobody outside these borders can understand what on earth anyone with a Scottish accent is saying, and it took converting the video into a silent, subtitled gif to make it a success. Your guess is as good as mine.

Now I know what you’re thinking: “where can we see pictures of your dog in the hat and cardigan?” And you’re probably also wondering how I feel about writing a sketch that became a gif that got 1,000,000 views, and not receiving a penny for it. Well, it’s all worth it now that the good people at BBC Writersroom will throw a blank-cheque development commission my way! Really though, it’s a double-edged sword. It’s always been that way with starting out as a writer or creative in most fields. You just keep doing work for “exposure”, because it will “look good on your portfolio”, or because “it’s your passion”. Until someone actually thinks you’re somebody worth paying. In fact, I was technically already paid for writing this sketch. I think it was £50. So I can’t complain. Besides, if I wanted to make money I wouldn’t have put it on Imgur in the first place. I probably shouldn’t have done that anyway, since I don’t “hold the intellectual property rights”.

So, is this the future of comedy? Gifs, random videos where our friends tag us and say nothing, and vertical Facebook videos of builders doing wacky antics on construction sites? Are these things the pinnacle of comedy success? Well, it depends what you define as success. If you mean views, then yes, almost certainly. But then you are essentially saying that my video about how Benedict Cumberbatch can’t say ‘penguins’, which took 5 minutes to make, is more successful than my comedy feature film, which took 2 years to make and almost killed me.

Actually now that I see that written down, it does seem more successful.

So is it critical success we should be striving for? What good is getting a ton of views if nobody actually likes what they’re watching? Well, during the Fast and Funny scheme, the BBC Writersroom was posting monthly blog updates on our progress, with links to our work. And there was one guy who kept uploading mean comments about us. He wrote things like: “This is garbage. I expect more from these new writers who are on an educational scheme. My taxes pay your salary.” And he obviously knew what he was talking about because he spent a lot of time looking up the posts and stating his opinion on them. I tried not to take it to heart, but when the final sketches went out and weren’t hit with immediate viral success I really started to wonder if I was actually just not funny. After a lot of soul-searching and denial, I’ve come to the conclusion that it doesn’t matter. I enjoy making comedy, and I’ll keep doing it. That’s the power of the internet: any idiot with a computer can get an audience.

So that brings us to the close of this rambling, incoherent blog.

There’s been a lot of ups and downs since finishing Fast & Funny. Doors were opened. I’ve continued to make videos for BBC Scotland (through Short Stuff and The Social), directed a few bits and bobs, had a feature film project fall through two weeks before shooting started, got signed to an agent, and I received 55 rejections (yes, I counted) in various forms last year. Right now, I’m writing my third feature film, due to shoot this Spring/Summer. It’s a horror about a man that makes unsuccessful videos for the internet.

Well, they say write what you know…

Watch all the Fast and Funny sketches

Find out more about Graham Hughes