Tell Me Your Secrets - Can YOU save Britain from the Nazis? Creating an interactive graphic novel experience

Michael Orwell is an Editor for Knowledge & Learning at the BBC. We asked Michael why he decided to use the format of an interactive graphic novel - “Tell Me Your Secrets” to re-tell the true story of Sir Henry Tizard's mission to the USA during World War II.  He also explains why digital narratives present a fascinating opportunity to create alternate histories and different outcomes which allow the audience to actively engage in the story, rather than sitting back and just watching the action unfold. 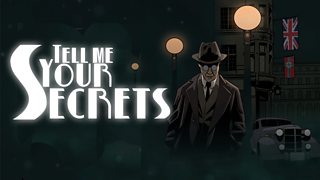 Why did you choose this story

I was browsing through a day-by-day timeline of World War Two on Wikipedia, when I saw mention of the ‘Tizard Mission’. I had never heard of it, but it seemed extraordinary and counterintuitive. A secret mission was dispatched to the then neutral United States, to ostensibly give away all our top technological secrets for free. Technology such as atomic bombs, jet engines and aerial navigation, which would go on to change the shape of the post-war planet! I ordered the authoritative book on the subject, ‘Top Secret Exchange’ by David Zimmerman and started to research the individuals involved, and the unusual circumstances of the mission itself. 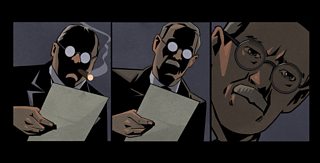 Why did you choose the graphic novel format?

I liked the idea that Sir Henry Tizard, a petroleum chemist from Kent, bespectacled and mild-mannered, would become the hero that would save Britain from invasion. He held very few of the trappings of a superhero - his results were achieved through quiet persistence, intelligent diplomacy and by engaging his American counterparts through the spirit of scientific collaboration. The secret mission reminded me of the counterfactual introduction of Alan Moore's graphic novel, ‘Watchmen’, where the US wins the Vietnam war in eight years and Richard Nixon stays in power till 1985. Imagine if the Tizard mission had turned out differently  - what alternate versions of our reality might we be experiencing?

Researching historical graphic novels, I discovered Daniel Burwen’s highly impressive re-telling of the 1959 Iranian coup, ‘Operation Ajax’. The tablet app version of this comic, while not allowing you to change the narrative, used subtle animation, an evocative and detailed soundtrack, plus comprehensive archive assets, all augmenting the gripping and complex storytelling. Additionally, graphic novel artwork is much easier to consume on the go than video – and any fantastical situation can be ‘artworked up’ – unlike video. 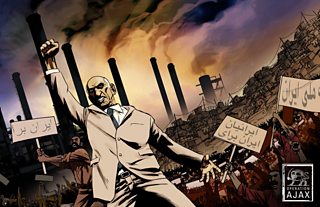 How did you storyline it?

Having successfully pitched the concept of an interactive narrative, my team, story producer, Fiona Cleary, researcher Rosalind Hill and I began to develop the project. We recruited David Zimmerman, author of ’Top Secret Exchange’ as our historical consultant. Together, we identified the important ‘acts’. First of all, we noted the mission set-up - the prologue – including the circumstances that made the mission so vital. We also felt the selection of the secrets was a key point of audience agency - where you could take the role of Tizard and be briefed on the technology by scientists. Then we knew the negotiations, which were often uncomfortable in real-life, could provide more choices and real drama; where Tizard and the British Empire that he represents, would come face to face with the New World’s emerging ambitions as a global power.

What research did you have to do?

We worked out the different outcomes the negotiations may have produced, and then reverse-engineered the meetings to provide these moments of decision for Tizard. We always tried to stick to factual comments from the real Mission’s notes, where possible - and we designed paths back to another outcome so you could try to 'read the room’ and change your mind, or stick to your guns - depending on what you thought was right to do.

Once we had settled on a structure of three items (therefore three meetings) and a rough template to structure the scenes, we went into production. By this time Fiona had moved onto another project, so Diarmuid Mitchell began to produce the interactive application with Goodboy Digital, our chosen agency.

We recruited artist Robert Nazeby Herzig and writer Joseph Lidster, who would turn our detailed story points into scintillating dialogue. Joe was very skilled at bringing to life a cast of slightly grey middle-age men, using the real-life accounts of their characters and temperaments.

Joe would write up scenes based on Rosalind’s extensive notes about the historical context, and Diarmuid and I would edit the scripts to get the required brevity and details to propel the story on.

What was the production process?

We made a decision to not record narration for all the dialogue and text throughout the story. We felt this would stifle the natural reading pace and interactivity of the experience. However I wanted to bring in the subtle sound effects and shifting musical tones that Operation Ajax had employed to subtly suggest atmosphere and sense of place, in that particular globetrotting story.

Ross Tregenza, a games soundtrack composer, provided suitably sombre and portentous themes, along with extensive ‘foley’ effect details to help paint a vibrant picture from Robert’s early sketches. He contrasted the sense of foreboding in Europe with a brighter, more optimistic jazzy musical sound, once the Tizard mission reaches American shores. However, even in the neutral US, the music begins to reflect the darkness, about to engulf the planet.

I wanted to signal a ‘change of gears’ after the completion of the meetings, where the consequences of the mission would be illustrated to the reader. So we returned to our idea of a limited amount of narration, as we imagined a retired Sir Henry, in his dotage perhaps, recalling how his mission had affected the conflict and the wider world after the war.

We were very lucky to secure the services of Anthony Head, star of ‘Buffy the Vampire Slayer’ to become the voice of Sir Henry Tizard. Of course the meetings created many different outcomes, all of which Anthony had to record – despite each audience member probably only hearing one ‘set’. 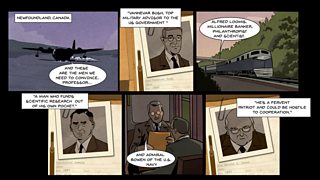 Do you think telling the story in this way makes it more relatable and helps to reach a different audience?

I hope this approach opened up this fascinating story to a much wider audience than most military technology history stories normally reach. The aim was to make it reflective – ask people to think about how important partnerships were agreed over a cup of coffee and grew into something more important. Or how the judgment of one man, defying his orders on a hunch, led to a vast change in the course of the war. The counterfactual alternate histories may not be to the taste of everyone but I think it makes the audience think, by default, much more deeply about the way it really unfolded. 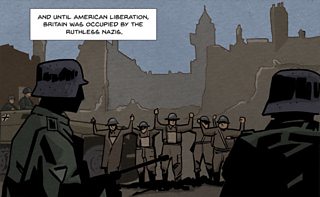 What kinds of original stories do you think would work well in this format?

I’m keen to pursue more stories in this format; I’ve considered other factual stories that could work in a similar way – using the choice & consequence mechanic – but I think the basis of a true-story is an important foundation. I would love to try a story, unconnected with war and definitely with a female protagonist. We tried extremely hard to find female characters for ‘Tell Me Your Secrets’ but they would have been totally fictional. 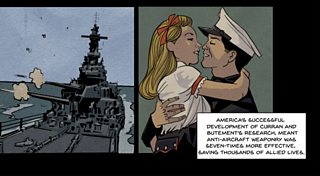 What have you learnt from the project – what were the pitfalls and what would you do differently in future?

Future versions of the format will need more thought for the mobile version. While the tablet version feels fantastic – it is an inherent challenge to make pictures and text visible on the same screen on small devices. I’d also like to make a ‘save progress’ function available so you can tackle the story in two or three chunks. Finally, as much as I love the prologue sequence, I’d probably shorten it so the audience can get into the action a little quicker.

But we’ve been delighted to celebrate Sir Henry’s remarkable achievements – and to shed light on the origin of Britain’s ‘special relationship’ with the United States of America. Tell Me Your Secrets is unashamedly an immersive and engaging digital piece, requiring time and effort – but I see no reason why digital experiences can’t be serious and substantial – as long as the audience willingly subscribes to the commitment.

Can YOU save Britain from the Nazis? Play Tell Me Your Secrets now (it takes about 20 minutes)

The view from inside BBC Writersroom's Comedy Room