How I found myself inside the Drama Room

I should caveat this blog post by saying ‘I never imagined I would be writing a blog for the BBC and, if the words aren’t in the right order, it’s because I’ve drunk my own body weight in tea and prioritised sorting out my sock drawer as a procrastination from having to write something that I didn’t feel I was equipped enough to write about (on the plus side, my sock drawer is looking great).

I’ll start at the beginning. Ish. This being in a crazy, brilliant little place in the Oxfordshire countryside (aka The Oxford School of Drama) where I trained as an actor. I love acting and still juggle it alongside writing but upon graduating I realised my desire was to tell stories, and that didn’t necessarily mean I had to be the one saying them out loud. I was also bored of scripts I received depicting feisty/sexual/innocent one-dimensional women whose only purpose was to serve the journey of the male protagonist, so after a few glasses of wine one wet Tuesday evening, declared I’d have a bash at making the words happen myself.

So I started writing. First a 5 minute play followed by a few 15 minute plays followed by a full length play I wrote whilst on the Soho Theatre Writers’ Lab (which I strongly recommend). I’ve done it, I thought, I’ve written an actual play with actual words (and a – hopefully – well rounded female protagonist) what next?! Well what came next was a series of rejections and back to the aggressive tea drinking unable to focus on writing the next thing.

I carried on writing but wasn’t sure what it was for, it felt indulgent, did I really have anything of any interest to say anyway? And what was the point, I wasn’t going to change the world with a story. And these words weren’t paying my rent. I felt defeated. Then something lovely happened, I landed an acting job with the incredible Cardboard Citizens, a theatre company who work with homeless and ex-homeless people and tell their stories. We toured to theatres, prisons and homeless hostels and I was humbled and privileged to see the effect our story was having on people. Stories have power, I remembered.

So I started writing again, still with only the theatre in mind – someone like me with no connections to the TV world and no idea what a pitch was (the grassy kind is the closest I’d ever come before) would clearly never get to write for the telly. 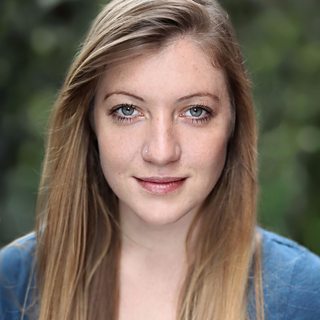 Then around Christmas last year a friend and fellow writer suggested I submit my play (the one I’d written when at Soho, the one gathering dust under my bed) to the BBC Writersroom Open Submission window. I scoffed. It’s a play! They won’t want a play. They want the next Line of Duty or Happy Valley. Then I did a bit of reading and discovered you could get feedback if you got through to a certain round. Well some free feedback would be great, I thought.

So in the script went and off I went back on tour and thought nothing more of it. Until an email landed in my inbox for an interview at the BBC. Now, we’ve all seen W1A where the intern puts the wrong letters in the wrong envelopes and I thought ‘oh that’s what’s happened here’, some poor intern has sent the interview email to the rejection pile and they’re about to get a bollock-ing worse than the time they put normal milk in the Commissioner’s coffee (a recent convert to Veganism). But the retraction email didn’t come so along I went to the interview, unsure of what to wear as a “writer”, crippled with nerves.

At reception I was met by BBC Writersroom Development Producer Abigail Gonda whose first comment upon seeing me ‘Hayley? I knew it was you, you look like a writer’ put me completely at ease. The interview was tough but inspiring and I left desperate to be offered a place.

And here I am. 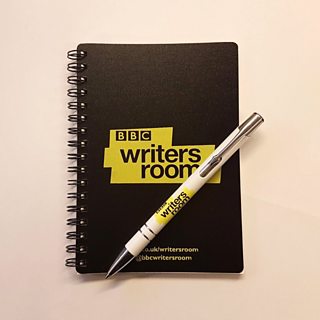 These could be yours...

We began in June and have had three sessions thus far. All the other Drama Room writers are lovely and I’ve already learnt so much. And being given a BBC Writersroom pen makes you feel like a proper writer (also I’m a pretty poor actor so free stuff always makes me happy. They’ve got great notebooks too…..)

Last week we had our Radio Drama Day at Broadcasting House.

Ahead of the session Abigail sent us a bunch of BBC Radio Dramas to listen to and I was pleasantly surprised to find so many I enjoyed. Comment is Free by James Fritz is an incredible piece of drama and demonstrates perfectly the freedom of the form of radio and what you can achieve with it. Fritz uses twitter threads and online comments to tell the story in a way that wouldn’t be achievable on TV or in theatre. Accompanying these radio plays was a request from Abigail for us to write a 75 word pitch for a radio drama that we would pitch to a producer during the day and get feedback on. The mere thought of this made me want to vomit a kidney.

The day consisted of advice, chats and tips from a myriad of BBC radio producers and a tour of the recording studios. I learnt SO much about pitching, different radio drama slots, the writer producer relationship, the importance of sound and what will and won’t work on radio.

Then came the pitching with Producer Marc Beeby. The pitching stuff of nightmares is me standing in a room full of angry looking important people while I fumble around with pages of illegible writing forgetting what my idea was and ending up with a persistent cough (sorry Theresa). This was nothing like that. We were sat down (hurray!) and had 5 minutes to chat about why we wanted to tell the story and essentially, what the story was. Marc was really helpful and I feel confident I now know how to make the most of those 75 words (which is not very many and as you can tell from the length of this blog, if you’ve got this far, I tend to overwrite…).

Finally came speed-dating* with some more BBC Producers. 5 minutes to chat about your idea, your previous work, what you think of radio, what you’ve learnt. This again was far less intimidating than I expected. I left the day feeling exhausted, inspired, and with both kidneys safely intact.

Our radio day has completely changed what I thought radio drama was. The 45 minute Afternoon Drama on Radio 4 gets on average 2 million listeners. That’s more people than I could ever hope to reach with a play in the theatre, even if it was in the Olivier (Rufus, you know where I am). Similar to TV, radio transcends class and location – it’s free and it comes to you! You can do things in radio that are tricky to pull off in the theatre and expensive on TV. It’s a really exciting medium and one that I think is about to undergo a bit of a revolution…

*of the pitch variety. No Cilla Black in sight. Ok that’s not really speed dating is it but I’ve never been and can’t think of any other cultural reference points

I will leave you with my top tips:

1. Keep writing
2. Don’t take rejection as a concrete truth on your piece. You wrote it because the story is important to you and there will be someone else out there just as excited about that story
3. Help each other. One of the writers from our group is far more experienced than me having pitched her own work and written for continuing drama. What started as intimidation of her CV quickly turned into realising there was so much I could learn from her and she’s been so incredibly generous (even sending me her pitches!)
4. The best cup of tea is made with Unsweetened Almond milk
5. Listen to loads of radio drama and find out which producers are producing the work you like
6. The BBC is not a closed shop. I didn’t think I’d be here. They’re friendly and encouraging and supportive; anything but scary
7. Keep writing
8. And finally – you’re very unlikely to vomit a kidney, so don’t waste too much time worrying about it

Find out more about our Drama Room writer development group