The Moonstone: An interview with writers Sasha Hails and Rachel Flowerday 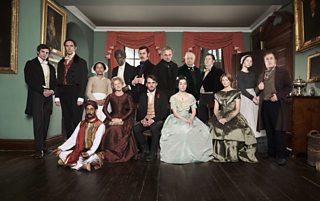 When a diamond goes missing after a party at an English country house, the charismatic Franklin Blake realises he can only win the heart of his true love, Rachel Verinder, if he finds the thief and recovers the gem… And so the adventure begins!

Adapted by Rachel Flowerday and Sasha Hails, The Moonstone is a star-studded adaptation of the world’s first ever detective novel. It’s full to the Victorian rafters with wit, romance, intrigue and cliff-hangers and will air across five consecutive afternoons on BBC One, starting Monday, 31 October at 2.15pm.

Gavin Collinson: What can we expect from The Moonstone? How would you describe it?

Sasha Hails: It’s a brilliant Victorian investigative drama that leads up to the first ever Crimewatch where they do a whole re-enactment to sort the mystery out.

Rachel Flowerday: And one of the things we both loved about it is that it’s also a great love story. It isn’t just a mystery. The mystery hinges on Franklin’s love for Rachel Verinder and if he doesn’t solve it, their relationship will die… So he has this huge motivation. It isn’t just that the Moonstone is incredibly valuable – although of course it is – it’s the fact his heart will be destroyed forever if he can’t reclaim the jewel…

SH: And Sergeant Cuff understands this. Near the beginning he says, ‘A rose is worth more than a diamond… It’s not just a gem we’re after, is it, Mr Blake?’ 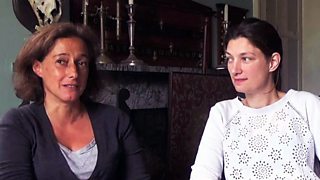 GC: The original novel, The Moonstone, is made up of a series of letters from different people with differing tones and approaches. What kinds of issues are thrown up by adapting a book with this form of narrative?

RF: Well, from the very beginning we were clear we didn’t want to simply do a linear retelling of the story and we wanted to reflect the epistolary nature of the novel. We were trying to work out a way of interpreting that for the screen and we happened to watch True Detective where famously, the first series is a sequence of interviews in the present, flashing back to events in the past, seeing the dichotomy between what people are saying happened and what really happened, and understanding how people got to this place, being completely different people to who they were in the past.

We thought that was a really interesting televisual way of looking at narratives and we decided the way to approach The Moonstone was to have Franklin Blake interviewing, in the present day, the people who write their narratives in the book and flashing back to the earlier story they’re discussing.

SH: It’s known as the first investigative drama / detective novel and we wanted to make the most of that and to establish it as the first ever Victorian investigative ‘world’ so we created a mini investigation room in the house. We have the evidence building up over the course of the five episodes as the clues emerge. Actually, not to give too much away, but all the clues build up and it foreshadows television detective dramas as this book gave birth to the entire genre. 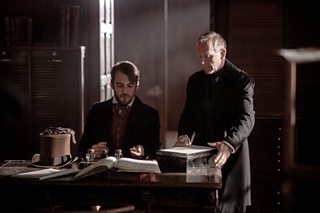 GC: I’m not getting at the novel in any way, but was this a problem for you – the fact one of the central characters is a posh, slightly spoilt teenager from a different century? How do you go about making her relatable?

SH: Well, she’s not really like that! She might have money but she’s actually a very relatable character to young women of today. She’s very forthright and headstrong and anti the Victorian conventions. She strikes out on her own. She’s quite a rebel!

GC: It’s interesting – when I described her in those terms I could see you didn’t know who I was talking about.

SH: I thought you were talking about Franklin!

SH: Yeah, but so is ‘our’ Rachel. She not just some petted young woman. In fact neither was Wilkie’s Rachel. Wilkie Collins was quite astute about women, right across the classes and he made them extremely characterful.

GC: I always hate asking who’s your favourite character but if you had to go away for a weekend with one of them… Who are you packing your bags with?

RF: Well, my favourite character is Miss Clack, but I wouldn’t want to go anywhere with her! She’s a brilliant character… to keep very far away from!

RF: She’s a character you love to hate and it would be very easy to play her as someone you want to look away from, but Sarah is mesmerizing and very funny.

RF: He really pulls it off.

SH: He does! He’s warm and compelling and he has real status. He knows how to work a camera! He’s brilliant. 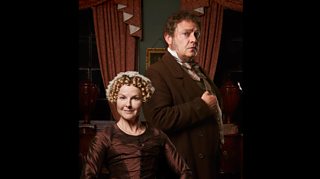 GC: Who directed The Moonstone?

RF: Lisa Mulcahy. She’d been working on Red Rock with John and she’s fabulous. She did absolutely amazing things with this show.

GC: It’s going out in a daytime slot. Were you aware of that when you were writing it…?

GC: …and did that knowledge impact on the way you wrote? References to drugs, for example…

RF: I don’t think there’s anything we’d have done differently for primetime. I guess there might have been a little more money in play…

SH: But I think sometimes too much money stops creativity. So with The Moonstone, some of what could have been considered limitations gave birth to some of our best ideas. There is that thing, isn’t there, about sometimes limitations are good things?

And you know, the wonderful thing about it being daytime was the fact it was done by a small team. Sometimes you can have too many cooks stirring the broth whereas with this we had me and Rachel. No script editors. We were basically each other’s script editors and we also had [executive producers] John Yorke, Jo Sargent and [producer] Joanna Hanley.

RF: But they were very hands off. I mean, they know what they want but there was no unhelpful meddling!

GC: Not having a script editor is strange, isn’t it?

SH: It was so good to be working within a small team because everything stays connected.

GC: And how did you write it? I mean, how did the collaboration work?

RF: We sat in one room for five days. Just me and Sasha with John Yorke coming in. In that time we broke down the entire five episodes, beat by beat. We’d pitch episodes to John when he came in to make sure we were making sense!

SH: We put up whiteboards, put them on every wall so we were surrounded by writing. It was like being inside your own brain!

RF: Every beat of every episode was planned out and they barely changed.

SH: We tossed a coin to decide who’d get which episodes….

RF: ..and then we went away and wrote the first drafts. I wrote ep 1. Sash wrote ep 2. We reconvened and gave each other notes on them.

SH: Quite! Ha! No, we did to a large extent because we both had to invest in every beat of each other’s episodes.

RF: I don’t think there’s an episode where one of us hasn’t written a scene in it. We’ve got parts of ourselves in every single episode.

SH: And also, because we created the beats together, it really is a work of total collaboration.

RF: And when one of us got stuck we’d call the other one to talk about problems with a given sequence and that made the whole process easier. 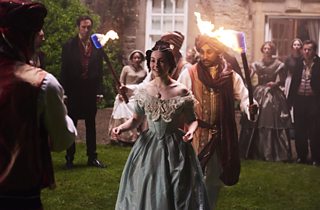 GC: How involved were you with the non-writing side of the production? Were you around in Yorkshire when it was being shot, for example?

RF: We were incredibly fortunate. We were involved in the casting, for example…

SH: We made casting suggestions and quite a few of them got taken on.

RF: We watched the edits and gave notes on those.

SH: That was another joy of it being a small team: our notes were really listened to. That small team thing – it is fantastic! 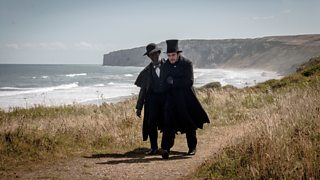 GC: Let me ask you a few more general question, if I may, Sasha. You’ve done a lot of acting. Does that influence your style of writing?

SH: It’s impossible to say because I’ve never written without having been an actress, but I guess I do love listening for the rhythm, considering whether if I as an actress, was doing those lines, would they serve me? When I was acting I noticed scripts that came to life in you, or scripts that you had to force into life. And so what I try to look for is, if I was saying the line, would it rise up in me? Would it connect with me and take me further?

RF: And I think you’re always looking for the emotional drive through every episode, Sash, whereas I’m possibly more cerebral, so it meant working together was ideal!

Big thanks to Rachel Flowerday and Sasha Hails. And don’t forget, The Moonstone airs across five consecutive afternoons on BBC One, starting Monday, 31 October at 2.15pm.

More on The Moonstone:

Short interview with Writers Sasha Hails and Rachel Flowerday on adapting The Moonstone.

Executive producer, John Yorke on adapting the novel for BBC One.

John Thomson explains how his character in The Moonstone Sgt Cuff "doesn't miss a trick".

An Interview with Elsie Diamond

Children's Drama: From Concept to Screen