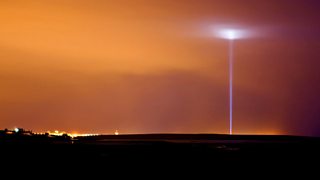 I always wanted to be a writer, but I never thought I’d be a comedy writer. When I was twelve, thirteen – the age when your tastes in comedy form – there was a huge comedy boom, and after that it seemed every aspiring writer of my generation wanted to write comedy. I have often, stupidly, shied away from the most competitive areas of writing, and I didn’t think comedy was my strongest suit – so I occasionally tried it, but mostly I focused on drama, which I thought I was better at.

I was wrong about all of this, as I discovered when I pitched some sketches to That Mitchell and Webb Sound. The show’s producer, Gareth Edwards, was receptive and, although he couldn’t find room for me on that show at the time, he did alert me to other radio comedy opportunities. (I eventually got a couple of sketches on the show two years later.) I owe a lot to Gareth, who had no idea who I was – comedy’s not the ‘closed shop’ many writers believe. However, getting anything on most sketch shows is hard work – you’re inevitably competing against experienced writers – so I also owe a lot to two open-door shows: Newsjack, which I still write for, and Recorded For Training Purposes. These have actively sought out new writers, given upfront commissions to the best ones and even let them come into the office as long as they promise not to touch anything.

And this is the most important part – if you’re going to pitch a comedy show of your own, you need to build up relationships with producers and the open-door shows gave me the regular contact you need to get that. It was when working on Recorded For Training Purposes, which I got on with an overly sarcastic sketch about fatuous newspaper surveys, that I met its producer Ed Morrish. I’m rubbish at approaching people (although less so than I was), and opportunities have probably passed me by because I don’t want to annoy anyone, so I consider myself very lucky that Ed emailed me, in July 2009, saying this:

‘Are you up to much at the moment?’

‘Not loads, why?’ I replied. (Don’t do this, by the way. Always pretend you’re very busy with lots of important work but are willing to squeeze a bit more into your schedule.)

‘Just wondered if you had any ideas you wanted to do for radio,’ he wrote back.

Well, yes. I pitched him a sitcom called House Of Strangers, which we were excited about until we ran it past the comedy department’s commissioning panel and they said it (a) was too reliant on its jokes and (b) didn’t have enough funny jokes. From idea to rejection the process took about six months, and with hindsight I think the main problem was that I’d developed it too quickly. There was good stuff in it but it wasn’t built on firm enough foundations.

So we started again with an idea I’d been kicking around for slightly longer. It was called The Resistance, and it was about a woman called Katrina who goes to visit her parents for the weekend, only for aliens to invade while she’s there and lower a force-field which stops her leaving. So she forms a resistance movement in an effort to get out. I first discussed this with Ed in February 2010.

I did have some trepidation about pitching a science fiction idea. You hear stories about trying to pitch science fiction scripts in Britain: tales of commissioning editors whose eyes glaze over at the merest mention of the genre. Happily this was not the case at all with this project. Nobody, at any stage, tried to tone down the sci-fi: in fact, the head of comedy asked if we could come up with a title that made the sci-fi angle clearer, which is how we ended up with Welcome To Our Village, Please Invade Carefully. 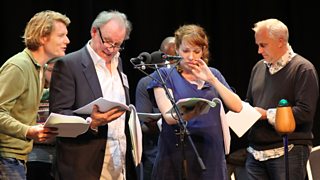 Image from the recording of Welcome To Our Village, Please Invade Carefully

The only significant change between the original pitch and the broadcast pilot is that I’d conceived of the resistance as comprising four characters: Katrina; Mike, a guy she used to go out with in sixth form; Patrick, the local conspiracy nut; and Lucy, a bored teenage girl who’ll rebel against anything, given half a chance. We later realised this was pulling focus – we had one source of tension as the four resistance members tried to work together, but there was also tension between Katrina and her parents and Katrina and the aliens. So I dropped Mike and Patrick – though they may well pop up eventually, if we get a series – and just kept Lucy to give Katrina a sidekick. This let us build up Katrina’s parents as characters, and allow more interaction with the alien leader, Uljabaan.

It’s taken nearly two and a half years to get from the first discussion to a broadcast pilot, which isn’t unusual. This is where you need a producer who believes in the project, and Ed has been superb – giving excellent notes, advocating it to his bosses and finally assembling a great recording with an outstanding cast (Katrina was written for Katherine Parkinson, so it’s a good job we got her). We’ve developed three entirely separate scripts – a ‘premise’ episode where we see the whole invasion happen, which we dropped because premise episodes are rarely as funny as a normal one; an episode where the resistance escape from the village, which was back when there were still four of them; and finally the episode that’s going out on Radio 2.

Welcome To Our Village, Please Invade Carefully goes out on Radio 2 tonight at 9.30pm.

The sitcom is written by Eddie Robson and is his first sitcom commission for the BBC. It's produced by Ed Morrish and stars Katherine Parkinson (The IT Crowd, The Bleak Old Shop of Stuff) and Julian Rhind-Tutt (Green Wing, The Hour).