What is your writing background? What part did Le Guin’s work play in it?

I had no formal training. In my youth creative writing courses didn’t exist. I settled for always wanting to be a writer. Then discovered, when I began, that it was a playwright I wanted to be: making four dimensional models with words that could stand up off the page and move and speak and shape environments or respond to environments in quasi- or super-real time. Acting was my second love and possible direction – but I discovered quite soon there weren’t enough of the parts for women I would, in my youthful arrogance, have wanted to play. I decided to create some.

I read English at Cambridge 1970-3. In those days the dominance of the male principle in academia, at least at Cambridge, on all levels, dead or alive, was as complete as to seem natural and insurmountable. The message was: I was a man. Or must act being one to get anywhere. But not man enough, whatever, to be a serious writer – least of all a playwright.

I’m pretty sure when she wrote her essay about being a man (which she quoted from in the BBC Radio 4 documentary) Ursula Le Guin was referring to the same sense of gender impersonation in her life and career. As the generic pronoun which I battled to exclude from her novel "The Left Hand of Darkness" still attests, ‘he’ is The Human Being – and as I/we are human and all wish (to paraphrase Michèle Roberts) to play hero, heroine and monster in the stories we read and live, we too must be a “he”, as best we might. The Brontës, and wondrous George Eliot, would certainly have understood that thorny path.

When, in my twenties, I discovered the people of Gethen in "The Left Hand of Darkness" I finally felt at home in the head of another writer asking the questions that bedevilled me about “reality”. Not least because of their use of the generic “he”. Unless a new pronoun was invented, there was no choice but to make all the ambigendered seem male in the readers’ heads. It wasn’t until I started to dramatise the book last year that I discovered how deeply it’s embedded in my own scripting psyche even now. Terrifying. Like a virus that never goes away.

After University I trained as a teacher in Drama and English. I did a project on the use and influence of children’s fiction in education and found Le Guin. Like the Brontës, she had maps and worlds and powerful women in men’s worlds trying to find a new ecology and voice and way to live more gently with each other and the world.

It wasn’t until I was 42 that I became a playwright. I jumped off a cliff like my first heroine, Lady Grange, in my first (epic) stage play.  I was driven to jump, because I’d found the story of a silenced woman whose life existed only in scrawled letters in the archives of Edinburgh Library and in the footnotes of history. Every footnote told a different version of her story. So I had discovered that:

• history is mainly centred on men and action with a few hooks in real fabric – much like fiction
• women’s history and fiction is out beyond the horizon, like dragons
• where mad women are involved research often discovers that it’s the world around them that’s insane (Juana la Loca was my next discovery – man! was the world mad under her mum and dad: Ferdinand and Isabella)
• I wanted to give these women voices more than I wanted to stay scared, please, or earn a regular salary

After I jumped off the cliffs of St Kilda with Lady Grange - writing it in three weeks straight, out of what was composed already in my head - Fate set her wheel spinning. I sent it to the National Theatre and BBC (Radio 4).  The latter offered me a production for The Monday Play slot (now sadly extinct). I could keep my big cast and crazy birds through doubling on radio, if I cut it down to 90 minutes. They paid me, so I did sell my play’s soul to that temptation.

My career continues in the same ad hoc way into my sixties – regular but evanescent, in that each project is a passing bird.  One constant is that they are (whenever possible, and often when impossible) about women and children and their lost lives and histories, like Tenar in Earthsea. I have brought Tenar in from the beginning of my adaptation, to parallel her childhood of name-stripping and powerlessness with Ged’s of name-giving and power.

How did you get involved in the project?

I’d been trying to dramatise Le Guin for twenty years and was always told ‘no’ – as were many others. I’d given up. Then a new producer on a drama placement rang up and asked if I was interested in writing a proposal with her for "The Left Hand of Darkness". After which another producer rang up and asked if I was still interested in that "Other Earthsea idea" (I’d always wanted to focus on the later books – beginning in the labyrinth in The Tombs of Atuan and moving to Tehanu through Tales from Earthsea to The Other Wind). If so, he said, we would have to start with the first three. The second three are still part of our Complete Earthsea proposal, sent to Le Guin for her permission, which she has given. So far the BBC has only commissioned the first half of our concept.

Like buses – you stand waiting for years, then two arrive at once. Three, I hope. I fought like a tiger to do it all, outrageously, given the deadlines we had. I’m sorry for all the other writers aching for years to do it – but not that sorry.

What is your connection to Le Guin’s works?

I was obsessed from childhood by mythology, human psychology and travel books. It seems to me that myth and geography and the nature of humans are the raw materials of all fiction, and that science fiction perceived of as a genre is one thing, and Le Guin’s books, quite another - or rather, many other things.

Strange to think it now – but my mind received a thump of enlightenment when it was Ged’s shadow he’d been chasing. “Yes”, I thought, “that’s the truth”.

I loved the Ged stories – in spite of my doubts about the exclusive male bonding of Tolkien that influenced them. Then, many years later, Le Guin went back to Earthsea and turned the boat around and flung out, as it were, the generic “he”, in Tehanu and the later tales, changing the roles and natures of both genders and of the endlessly charismatic dragons. My psyche, life and work was changed forever. As always, she kicks boundaries and opens doors on the impossible; touches the nerve of that familiar sense of loss, and recovery, of better worlds than this. Edens just in our grasp, if only we embrace changes within. Change is the core of her work and process. Change and the power of coming home from a place of abandonment. No wonder she speaks so powerfully to women and children.

She can still make my heart sing with a sentence.

Reading her essays and now, having had a chance to communicate with her over this work (to see her name in my inbox is still the most astonishing thing about the luck I’ve had getting this job), I find her the most extraordinary being. Wise, trenchant, staggeringly intelligent, beautifully witty, patient, generous and courteous. And Oh! rarest of talents to one stretched out on the rack of an eye-watering deadline or two: swift to respond. A saint, David Mitchell calls her. A saint with a sword though (for example her attack at a book awards ceremony last year on publishers and Amazon and capitalism). 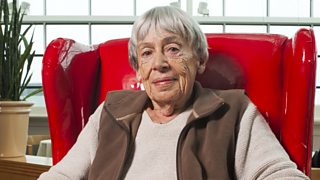 Do you think we are in a golden age for fantasy and sci-fi – has it now become mainstream?

I think of all fiction as one stream – with its springs in myth, oral storytelling, poems like Gilgamesh and Beowulf, comics and that greatest of all fictions: the "realist" novel – and reality itself. Resist all boundaries and genres, I think. Game of Thrones is clever and compelling, but insists “all men (sic) must die”, and portrays violence and sexual violence as endemic. If only Gandhi’s genes and not Genghis Khan’s had inseminated our cultures, the ways of women might play a bigger part in what was “endemic”.

What were the challenges of adapting Le Guin’s books specifically for Radio while keeping what is special and unique in the works?

I think radio has just begun to feel more confident about offering the audience complex plots thanks to writers like Gaiman, the impact of Game of Thrones, film and computer gaming. It would be nice to appeal to that (possibly) younger audience. Complex plots on radio are always a challenge.

Names were a challenge. We read all the names to Le Guin and she spoke them back and then the BBC pronunciation unit got busy; but with such large casts, changing as the characters grew up, packed recording days, retakes and editing, and ten days of back-to-back recording, there were always going to be challenges policing complete consistency.

I would have liked a bigger canvas to work the versions onto. But then, to have a canvas at all was a glorious thing. Where else but on radio would I have got this?

Neil Gaiman on the influence of Ursula Le Guin

Did you speak to Ursula Le Guin about the adaptations and did she offer any advice?

She approved the entire proposal prior to it being considered for commissioning. (A proposal takes months to write. In a way, it’s the biggest job because it needs all the thinking that might make the piece fit the slot and (one passionately hopes) honour the books and their original author.) She read early drafts of both projects, offered suggestions, and approved the directions we were taking. She also read the final drafts. She said, quite early in the process, she felt her books were in good hands, which was a massive relief for me to hear. At Christmas. The best of presents.

Both producers talked with her regularly and one - Allegra McIlroy – arranged, conceived and produced the exquisite documentary broadcast last week, where it’s mostly le Guin’s current voice we hear.

Do you have any advice you can share for other budding writers?

Discover a story you absolutely have to tell – or reframe – and do it with all your being.

Would you recommend Radio as a medium for writers? Why?

I simply love and prefer it as a medium. It has no real boundaries. You access thousands of imaginations that are at liberty to make of it what they will. It is the drama medium where your work is allowed to take more risks – because it costs less to make a dragon or a mistake, I suppose, than it would on television or in films.
There’s a big output – though less than there used to be.

BBC Radio Drama is a rare and precious beast. It needs more funding and space to flourish regardless of audience size or demographic. Some things are too valuable to compromise for cash, “news” and populism.

Find out more about Judith Adams on her website