The Scottish Comedy Writers' Programme will partner a writer with a Scottish based Independent company to develop and write a pilot episode script for an original comedy series for BBC One, BBC Two or BBC Three Online through a fully funded script commission by BBC Comedy and BBC Writersroom. This is also about supporting the indie sector in a tangible way while working alongside comedy commissioning.

Over a period of 6 months to a year, the writers will work alongside an Independent Production Company to develop their idea while attending various workshops to enhance their writing and knowledge of TV comedy through the BBC Writersroom team. 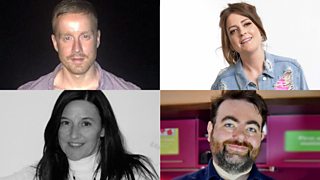 This is not a scheme for untested writers OR overly experienced writers with significant television comedy credits. This is an opportunity for writers in the early stages of their career and is set up to allow them the space, time and financial support to produce their best work to date. The shortlisted writers have at least one professional credit to their name and have already demonstrated talent and passion in their previous comedy work, and are ready to make the next step. They have all written for theatre, television, radio or film.

We hope that each writer will deliver a compelling script for the Network Comedy Commissioning team to consider and hope that the four projects demonstrate enough potential that one or two can move to the next stage of development post script delivery. Long term, our programme will hopefully be a catalyst for our selected writers and Indies to have a continued productive working relationship.

"Nurturing new talent is absolutely central to everything we do in BBC Comedy so we couldn’t be happier to announce this joint initiative with BBC Writersroom. Script development is the engine room of comedy and it’s crucial that writers are given the license to find their voices and hone their craft in a supportive environment, which our excellent producing partners will provide. Scripted comedy in Scotland is at an all time high but we’re always looking for the next great idea and can’t wait to see what the selected writers come up with."

The Writers and Production Companies

"Happy Tramp North is delighted to have been asked by the BBC Writersroom to participate in the inaugural Scottish Comedy Writers’ Programme. The standard of the shortlisted writers in the project was exceptionally high, and we couldn’t be happier that we’ve been paired with Bryce Hart. In a strong field, Bryce’s writing stood out for us."

"Since being a part of the 2016 Comedy Room scheme, BBC Writersroom has been a huge champion of my writing and their support has continually allowed me to take the next step in my career. I am thrilled to be taking the next step with Happy Tramp North. I am a huge fan of their work and believe together we can come up with something special – and hopefully funny."

"We’re delighted to be part of a programme for developing and supporting new comedy writing talent. Without this talent, the industry would soon fall apart, and support like this feels significant. In particular, we’re delighted to be working with Lorna Martin who writes brilliant characters, straight from the heart, and has a great knack for capturing the chaos and comedy of our everyday lives."

"I've received fantastic support from BBC Writersroom over the past few years and I'm delighted to be selected for this programme and excited to be working with everyone at BBC Studios Comedy."

"It’s very exciting to be a part of the BBC Writersroom Comedy Writers' Programme as the quality of the participants has been very high. I’m always interested in working with new Scottish Talent and so I’m thrilled to be working with Kieron Nicholson as we go to the next stage. His spec script really made me laugh and I’m looking forward to developing it further."

"I’ve always loved comedy, and getting to be a part of the first-ever Comedy Writers’ Programme is just a dream come true for me. The chance for new writers to write an original TV pilot script doesn’t come along very often. I couldn’t be happier to be working with Chris Young and Young Films, who have been producing award-winning comedy and drama for over 30 years."

"The Comedy Writers Programme represents a tremendous opportunity to develop new comedy for BBC network. Scotland is home to a host of established, new and up and coming comedy writers bursting with great potential.The Comedy Unit is really delighted to get to team up with Susan Riddell as part of the scheme. Susan is a superb stand up and writer and we’re really looking forward to developing a new script with her as part of the scheme."

"I'm delighted to be selected for this new Comedy Programme and very excited to work with The Comedy Unit. I grew up watching Chewing the Fat, Burnistoun and Still Game so this is an amazing opportunity to be part of."

The Boy with the Topknot