'The Last Kingdom' - an interview with screenwriter Stephen Butchard

How did you become a writer?

It’s hard to pin it down specifically but I started out writing for theatre. The Liverpool Playhouse ran a scheme for around ten to twelve new writers, a two week course, which I submitted to and was lucky enough to gain a place. Just being chosen for that was a real boost. Working there at the time was Kate Rowland (who later became Head of BBC Writersroom). To do the course I had to take two weeks holiday from my job as an Engineer.

I remember on that course we all had to write a scene about a postcard, and I was given a postcard of Hull funfair in black in white. I forgot all about it afterwards and carried on writing in my spare time. A year or so later Kate got in touch – by then she had moved to BBC Radio Drama – and asked if I’d be interested in turning that postcard into a Radio play. That was the first time I was paid for writing something but it also gave me the confidence to think I must be doing something right and the energy to keep going.

I wrote more radio plays over a number of years but carried on with my full time job as an Engineer and Project Manager, writing in my spare time. Although my job was going well, writing was what I really wanted to do, but I had to write in the evening and at weekends. Winning the 1997 Dennis Potter Award for ‘Soft Sand, Blue Sea’ as a new writer for TV was a big foot in the door to get an agent and meet people in the industry, however I was still writing part time even then. It was only after 'Always and Everyone' was greenlit as a series for ITV that I packed in my day job.

Do you think organisations like BBC Writersroom are important to a writer’s development?

BBC Writersroom is really important as you know the first ten pages of any script you submit will be read by them. It helps to reaffirm your commitment to writing if someone is prepared to read your script and give feedback. They also run events and workshops and it’s important to meet other people who are striving for the same thing as you. The Carlton TV screenwriting course was another example – about fifteen of us spent a weekend together with established writers coming in to give workshops and advice. I think we were paid £100 to write a thirty minute script. You don’t necessarily get a commission out of it but you get encouragement. 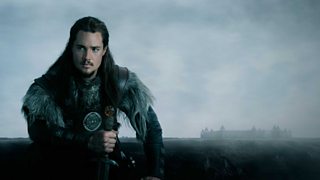 Jumping forward, how did you get involved with ‘The Last Kingdom’?

I worked with a guy called Phil Temple who was the script editor on 'Five Daughters'. He’s now a Development Producer at Carnival Films and we keep in touch. As we were talking one day he produced the book by Bernard Cornwell ‘The Last Kingdom’ - I read the blurb which immediately hooked me – a Saxon boy who was kidnapped and brought up by Danes, the conflict between Paganism and Christianity when England was being invaded, I thought “this has got to be a great story!”. I hadn’t read Bernard’s books before or seen Sharpe, although of course I was aware of it. I read the book and really enjoyed it. I think it’s essential that you love a book if you are going to be adapting it. As I read it I thought of things I could do with it.

Bernard was really generous and let us go in whatever direction we wanted with it. After all, the books would always be there, and the experience of reading them is personal to each reader. After I read the first book I knew that wouldn’t be enough for a full series and carried on to read the second in the series, ‘The Pale Horseman’. 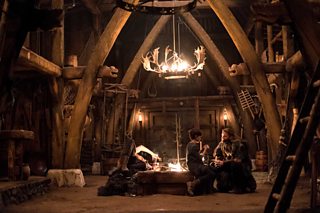 Did you know anything about that period of history?

No I didn’t but it hooked me in because I wanted to know why Alfred was called ‘The Great’. Uhtred is the main character in the book but I wanted to bring Alfred out and explore his real history. He was effectively the birth of England. This physically weak man became a king of incredible strength which fascinated me along with the history weaving through the fiction.

Do you do your own research?

I do as I think it’s crucial to do the spadework yourself or you won’t know what it is about that period or that story which inspires you. That should be personal to the writer. However we also had a professor from the University of Winchester to consult on specific questions - things like coronations. That was a real opportunity to grow and learn more about the period. 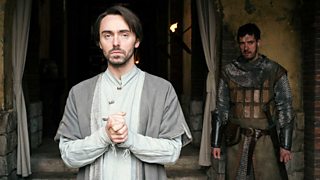 How do you make such a distant period feel ‘relatable’ to the audience?

Just because it was historical I don’t treat the characters as any different from characters in a contemporary setting. That’s important or it will feel stilted rather than real and naturalistic. These characters aren’t aware they are living in history, to them it is what their life is. Walking around with ironware and swords was the norm for them, they are living in the now. And they were very similar to us in terms of love, friendships, relationships, laughter. Humour is really important to me. It brings you into their world.

This is the first real period piece I’ve done, but no-one is aware that they are living in historical times. You’ve got to approach it through the characters first and show the world’s effect on the characters.

What do you think about the inevitable 'Game of Thrones' comparisons?

I’m not a watcher of Game of Thrones! That’s a conscious decision. I started work on this over two years ago and decided to stay clear of anything with a sword in it! I think ‘Game of Thrones’ is a lazy comparison really although we’re trying to achieve the same thing – a great story with great characters – but leather, cloaks and swords doesn’t mean the world is the same – after all they have dragons. It’s about finding your own original ground, we are based in real history and I imagine that makes us different.

What advice can you share for other budding writers?

The one thing I would say is that it is difficult to write. We’re all guilty of thinking about ideas for a long time – in your head there’s this brilliant series formulated. The hard thing is putting pen to paper or words on a screen. Everyone is capable of having a great idea but the hard thing is turning it into pages that people can read, into a script.

The real advice is to write so you have something to challenge yourself with. Before I start I 'm convinced each of my scripts can be the greatest one in the world, but I still need to get started on it, for example I’ve got a script that I should have started last week. Once you get past ten or fifteen pages then you have something to look at, to re-read and to grow. Starting is the hard bit, don’t put it off.

Catch up on BBC iPlayer

Meet the characters in The Last Kingdom