The Ark - Retelling The Bible story of Noah 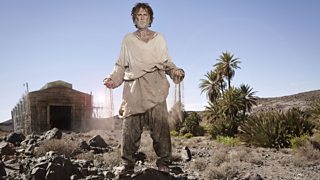 After writing The Nativity for BBC One, they asked if I wanted to write any other “Bible” stories. To be honest I hadn’t even thought about it, but when you’re sitting in a room with the BBC controller of Drama and he’s asking you if you’d like to write something; it tends to focus the mind. I thought hard, silently cursing my limited knowledge of the Bible and I heard myself saying “Noah”. Three years later I’m standing in the desert in Morocco watching David Threlfall build a big boat. 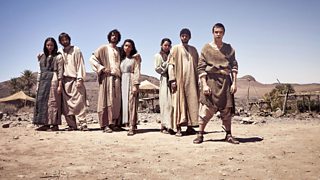 My first thought was that everyone had already done the dodgy looking floods and the animals trotting up the ramp two by two, using the fact that the alligators weren’t eating the cute ducks who proceeded them as proof that this was indeed God’s work. So that was the last thing I wanted to do, I decided to make it a story about faith. One man's faith in his God, a wife’s faith in her husband and children’s faith in their Father. What leapt out at me, as a reason to revisit the story, is how a family would react if the Dad suddenly announced he was going to build a big boat in the desert. This was my starting point because it felt real and grounded and took the story back to what I thought it was, rather than what it had become, the whole Noah’s Ark brand, animals coming in two by two was more akin to Peppa Pig than a story of God cleansing the earth of sinful mankind. 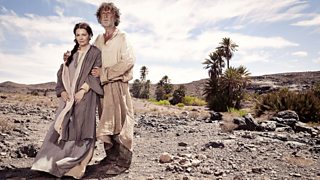 So my original pitch was that I would end on a single raindrop falling into Noah’s outstretched palm. When I wrote that first draft though, I instinctively knew that the audience would feel cheated, that they’d invested ninety minutes to watch a film about Noah and didn’t see a single animal or get a sniff of a flood. I wrote a second draft and found a way to deal with the flood and the animal conundrum without sacrificing my original vision for the film. They’re there, but they’re not what it's about. It took us a while to find the money we needed to fill the funding gap, but we got lucky by finding a U.S partner and even luckier by securing David Threlfall and Joanne Whalley as Noah and his wife. I then heard that whilst we had been delayed by funding, Aronofsky was making his own version of the story with Russell Crowe as his Noah and a reported $130 million budget. Although I knew that the two films would be different, I knew we might struggle to get noticed alongside it. We also had the same title so we knew we had to change it. Another stroke of luck saw my great mate Sarah Phelps change the title of her new series from The Ark to The Crimson Field and so we became The Ark. I didn’t watch Aronofsky’s Noah, until we had finished shooting The Ark because I didn’t want to be influenced by it in any way, but as soon as we were locked I went to see it. If I’m honest, I was pretty relieved, it wasn’t great, but more importantly it had nothing to do with the story of Noah or certainly not the story of Noah that we were telling.

I’m pretty proud of The Ark, I think we’ve made it relevant for a modern audience, reclaimed the story from the nursery walls and not a single duck walking up a ramp in sight.

Watch a trailer of The Ark

Read scripts by Tony Jordan in our online script library