Dramatising 'Sense and Sensibility' for Radio 4 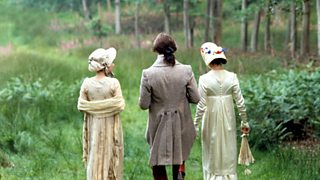 It was an honour to be asked to adapt Sense and Sensibility for Radio  4. It is such a sharp, tightly-constructed and yet generous-hearted novel. And I was pleased to learn that the broadcasts would coincide with the announcement that Jane Austen's image will soon be appearing on some of our bank notes. A good time for us all to be reminded of the brilliance of her work.

I knew from the start that my greatest challenge would be to try to deliver the story in the requested two episodes. The pay-off would be (hopefully) a dramatisation with a strong, dramatic pace, where listeners who were new to the story wouldn't be able to get ahead of  the events but be constantly surprised and engaged, and where those familiar with the story would feel satisfied, but never bored, by the  re-telling. My main concerns were that, firstly, two hours would not be sufficient to contain the novel's deceptively lengthy plot, and, secondly, that I would find myself having to lose some of the humour and some of the beautifully observed insights into human nature which make the novel a delight to read.

Plots which follow a pretty much linear path - as this one does, can be very hard to condense. a) has to happen so that b) can happen and then c) can happen. One can't have the narratives of several characters bubbling away at the same time. Although Austen tells the story of both Elinor and Marianne, she does so in a broadly schematic way. After a few chapters of introduction to the Dashwood family members and their situation, she then spends a substantial number of chapters focusing on Marianne's story, and, only when this has reached a natural pause, does she switch her focus to Elinor's story. This pattern is then repeated twice over. I didn't feel that it would be either possible or wise to try to disrupt this pattern - by forcing the stories to overlap, or allowing one to become a sub-plot to the other - so I knew that I would have to keep the story telling ruthlessly tight. 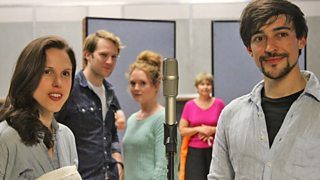 Picture of the cast taken during the record

This meant making some hard decisions. For example, having thought I would give Elinor the narrative voice, allowing her to directly address the listener and lead the listener through the story, I quickly realised that this device - which can involve some very dense passages - would be too time-consuming and that, instead, I would have to guide the listener through the story using only lines spoken by characters within the scenes. And then, of course, I had to cut some of the characters who appear in the novel - most regrettably, Margaret, the younger sister of Elinor and Marianne. In a way, it felt wrong to do away with a member of this much-loved family, but I had to face the fact that Margaret is neither material to the plot, nor thematically vital. One could argue that Mrs. Dashwod's having three daughters to support increases the stress she is under and strengthens the injustice of John Dashwood's behaviour. However I didn't feel that Austen wanted her readers to give too much attention to this element of the story. We never feel that Mrs. Dashwood is absolutely desperate to marry her daughters off for financial reasons, or that she genuinely feels that poverty threatens her family. And whereas in a film or even a stage adaptation, I could have written that Margaret was passively present in a scene, or simply contributing to the general atmosphere of a scene, it is a great deal more difficult to do this in a radio adaptation, where each character who is present has to signal their presence to the audience by speaking and/or being spoken to fairly early on in the scene. If that character's contribution is never going to be significant, one can't justify the time it takes to keep introducing them into proceedings or making excuses for why they aren't there.  I hope listeners will not feel her loss too greatly.

By keeping the story telling tight, I earned the space for some reflective or more character-led exchanges - particularly between the sisters. And whilst some of my favourite Mrs. Jenningsisms have had not made it through, I hope there are enough of them there to give the listeners a sense of Jane's Austen's mischievous spirit.

Helen Edmudson is the writer of the new Radio 4 two part drama Sense and Sensibility - an adaptation of Jane Austen's novel about two sisters who learn that sense must mix with sensibility if they are to find happiness in a society where money governs love.

Sense & Sensibility will broadcast this Sun 4th Aug and 11th August at 3pm, with repeats 10th and 17th August.

Getting paid to write comedy

The Writer's Prize commission: Bang Up