In this week's episode of Casualty (Saturday 11th July) nurse Jade Lovall (played by Gabriella Leon) meets her birth mother and finally uncovers the truth behind her past. Co-writers Charlie Swinbourne and Sophie Woolley were both part of our first Writers' Access Group. We spoke to them to find out more about how being part of the group led to the opportunity to write the episode, and how it was created to authentically tell the story of the show's first regular deaf character. 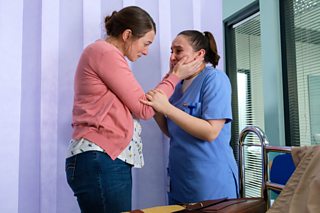 What was the journey to the point of being given the chance to write this episode of Casualty?

Charlie: I'd spent over a decade creating dramas, comedies and documentaries with deaf actors and contributors, in sign language, having a lot of different experiences of telling different types of stories, always with deaf people at their heart.

Becoming part of the BBC Writersroom's Writers' Access Group gave me the chance to meet mainstream producers for the first time, share my work with them and take steps into making programmes for a wider audience.

It was through the group that both Sophie Woolley and I met Loretta Preece, who worked for Doctors at the time. She later moved to Casualty and contacted us about discussing an episode about the character of Jade. We went down to Cardiff and spent a day discussing the character and potential stories, including having a tour of the set! It was a really positive, encouraging day, and we were delighted to be commissioned to co-write the episode.

Sophie: I’ve written for stage and BBC radio drama and sitcom. I took part in the BBC Writersroom's Writers' Access Group. I wrote a pitch for another show which led to being asked to pitch and then write for Casualty with Charlie. We went to Cardiff for the first two meetings and had a set visit. 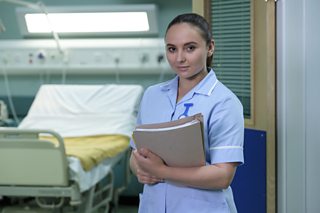 Once the opportunity to write for Casualty came about, what was the process of devising and pitching this episode? Who did you work with? How long was that process?

Charlie: During the initial day we spent in Cardiff, we started sketching out stories, sharing a lot of ideas and thoughts. We then went away and wrote a treatment for the episode, before then going on to write a scene by scene document.

Along the way a lot of things changed as we got feedback from the team and made changes, big and small. It was a very collaborative process. I remember we went back to Cardiff again a couple of months later for another meeting and our sign language interpreter commented that the stories seemed completely different than the first time! We were tweaking the stories all the time as we went through different drafts and moved on to writing the scripts.

Sophie: I worked with Charlie and the script editor, the medical editor, and the producers. We also met with the wider production team including the people designing the sound, because the sound will be from Jades POV. When we got notes from the medical editor, it was from all of the medical experts employed by the show. So each section of medicine in the show, is checked. The medical aspect of the writing was as creative and exciting as the emotional and character storylines. 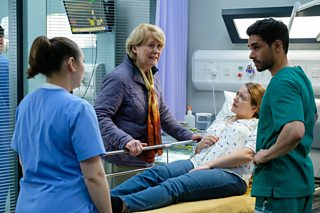 What help are you given in terms of story documents, character profiles etc? Do you work with a Story Producer, Script Editor? Who supports you?

We were sent documents with all the storylines for the episodes around ours, so we had a sense of what came before our episode and what was going to come after it. We also had a series bible, character biographies and a floorplan of the set!

We were directly working with our Script Editor, who'd collate the responses from the team so that we would get one set of notes for each draft, which we'd then usually talk about and discuss before working on our next draft. We also had a lot of input from the producer, Dafydd Llewelyn, throughout the process. 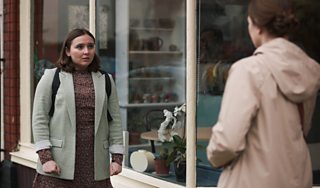 Is there a structure to a Casualty episode in terms of A, B and C storylines, guest stories and serial stories for the show’s permanent cast? Was this new to you?

Charlie: When you're writing a Casualty episode, it is a mixture of continuing stories about the show's permanent cast which are combined with your own guest stories and characters to create your episode.

There are A, B and C storylines, as well as other story beats that writers will need to include! I was aware of this way of working through my previous experiences, but each show is different - the team gave us great guidance and support with this.

Sophie: I hadn't used A B and C story lines in my previous theatre and radio work so that was all new and very exciting! 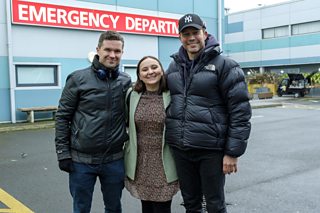 Can you set the scene in terms of Jade’s story to this point for anyone who hasn’t been watching?

Recently, she's read a short letter from her birth mother and met her social worker, and this has led her to make the decision to meet her. When she does meet her, the situation is different to what she'd thought...

This episode takes Jade into new territory in terms of dealing with her history, her sense of her self, and her deafness. From now on the audience will know her in a deeper way than ever before. 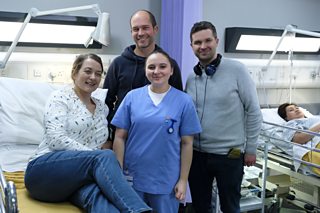 At what point in the development of the script did you include elements like the audio giving the audience a sense of Jade’s hearing loss and her world, how it changes with and without hearing aids and in different environments? Are these written into the script?

Sophie: I thought about it from the start. Yes it was in the script. We spoke to the actor Gabriella Leon at the start as well, to get her experience. We all have different types of deafness. I have acquired deafness. I went totally deaf slowly, over 20 years, I used captioners and BSL interpreters to access my work and a few years ago I got a cochlear implant. This means I have experienced many types of deafness. Each time I lost more hearing, The world was suddenly changed again.

Charlie: This was a part of the script from the earliest stages. We were always including what Jade's soundscape might be like as she went through her journey in the episode, drawing upon our conversations in Cardiff, which Gabriella Leon, who plays Jade, was a big part of.

We also made it clear which words Jade might miss, as people spoke to her. And of course, there are points when she's not wearing her hearing aids at all, so that was included.

The descriptions of the sound became a bigger part of our thinking once the team started planning how the audio would be recorded and would play out on screen, giving the audience a true sense of what Jade hears. 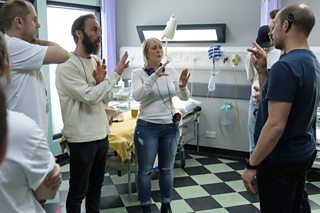 How important was it to show Jade’s mother being Deaf (ie using sign language) and the distinction with Jade’s use of hearing aids?

Sophie: Deaf people are all different. And we are all brought up differently. This impacts the way we communicate and our confidence in the world and in life.

Charlie: We wanted to explore deafness within a family dynamic, to show that the thing people take for granted - that you can talk to your mother, or daughter - might be a bit more complicated. This went beyond just Jade and her mother, but also reached her grandmother too. We see three generations of a family in this episode and how deafness has touched each of their lives in different ways.

What challenges did this bring for production? Did you work with the sound department to explain your intentions?

Charlie: We did quite a lot of thinking about how the sound would work as the process went on, and we had a meeting in Cardiff where we all decided that the audience would hear what Jade hears.

We talked with the sound team that day, got a sense of what they could do, and gave them a sense of our vision. A lot more work went into it as the director John Maidens (who is also deaf) became involved and started planning his vision for the episode.

Having John as director was brilliant because he completely got the story, knew from experience what we were getting at. With two deaf actors as well, the episode was made with deaf people in many of the key creative positions, which I believe is a real first and something I hope the industry sees as a real example to follow. 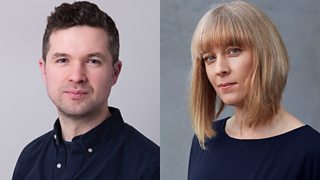 What do you hope people will take away from the episode?

Sophie: A deeper understandng of how brilliant Nurse Jade is. I hope people will take away understanding about the complexity of the different deaf experiences. We are all different.

Charlie: I hope the audience really enjoy it, that they're moved by the story, and get to know Jade in a different way to before. I also hope that long after they've watched it, a sense of deaf people's lives and experiences stay with them.

For many deaf people, difficulties with communicating with their own families, and sometimes the feeling of their deafness not being fully accepted by those close to them, is a big part of their lives. Knowing that from real-life experience definitely helped to inspire elements of this story. Hopefully deaf people will feel their lives are reflected in this episode, and non-deaf people get to see a side of life they might never have thought about before.

What have you got coming up next?

Sophie: I’ve been doing some more TV writing (under wraps for now!). I also have a writer bursary at Wellcome Collection, a medical archive to research there this summer.

Charlie: The Eastenders storyline I pitched is still on screen, I've also written a script for a new CBBC series, and I'm currently writing a 45 minute drama for BBC One. As well as that, I'm writing a short lockdown comedy featuring two grumpy old deaf men who are trying to talk to one another on Facetime! The current situation has delayed some of my work but I'm still writing every day and I'm hoping to keep learning and developing as time goes on. The last year has been really transformative for me and I'm really excited about what the future holds.

Watch Jade's story on Casualty on BBC One on Saturday 11th July at 8.25pm and on BBC iPlayer

Casualty is a BBC Studios Production for BBC One